The development of the rigid rod endoscope by Hopkins in the 1950s opened a new path for surgery in almost every branch of the discipline. Although endoscopes have been used for centuries, early devices comprised a light source that directed light through the lumen of a tube through which body cavities could be viewed directly. These devices allowed the inspection of the bowel, esophagus, bladder, and airways in a way that had not been possible before. Given the limitation of the necessarily narrow diameter of the lumen of these rudimentary endoscopes, however, there was little potential for surgical procedures to be carried out endoscopically.

The “Hopkins rod” revolutionized endoscopy by applying optics to the problem, along with the relatively new technology of light-carrying fibers. These new endoscopes allowed for a wide field of view with good illumination; this combination propelled endoscopy to new levels of utility. Endoscopes have had a long history in surgery, including otolaryngology, but, until recently, have had less widespread acceptance in the field of otology.

Early uses for endoscopes in otology were as an aid to microscopic surgery1 and for the second-look inspection of mastoid cavities through a “stab-incision,” in which a canal wall-up procedure had been performed.2 Other early uses included photography3 and exploration of the middle ear.4,​5 Despite the advantages of the endoscope in obtaining a wide field of view and a superior access to obscure areas of the middle ear, the use of narrower-diameter endoscopes1 made endoscopic surgery, as such, technically challenging. In the early 1990s, Tarabichi published the first series of cases that had been managed exclusively using an endoscopic approach,6,​7 followed by a publication on the long-term results of this work.8

Since these early days of endoscopic ear surgery (EES), also often referred to as totally transcanal EES (TEES), other institutions have taken on the technique and published the results of their work.9,​10,​11

Even though the origin of cholesteatoma is within the middle ear and it merely extends into the mastoid system, it is often thought of as a mastoid disease rather than a middle ear disease. This is likely because of the need to perform a cortical or even an extended mastoidectomy to gain access to the anterior epitympanum and to the facial recess so as to address disease in the sinus tympani through a posterior tympanotomy. While this is now accepted practice, it has become the necessary result of the natural access route to the middle ear, the ear canal being too narrow to allow for adequate access with the microscope.

The mastoid performs a vital physiological function in terms of gas exchange and as a buffer for fluctuations in middle ear pressure. The seemingly unwarranted destruction of this often uninvolved and often healthy system to allow access to the middle ear is particularly apparent when removing disease limited to the middle ear or epitympanum. Given that the rates of residual disease in the mastoid are relatively low12 when compared with regions of the middle ear, such as the retrotympanum, it seems disproportionate to damage large volumes of healthy bone and mucosa merely to facilitate access to the middle ear. Endoscopic ear surgery takes advantage of the endoscope to gain access to all areas of the middle ear without resorting to the need to damage healthy tissue to achieve adequate exposure.

In addition to the reduction in damage to healthy tissue, TEES eliminates the need for a postauricular incision or endaural incision to allow access to the surgical field. Although the skin incisions associated with traditional open ear surgery are seldom considered important, patients hold a great deal of value in being able to avoid a painful incision as well as a scar; indeed, when discussing EES with many patients, the issue of the scar and the need for the removal of sutures become key points of discussion, perhaps surprisingly given the gravity of the issues surrounding cholesteatoma surgery. This is an indication of the importance of the skin incision to many patients.

Access to the anterior epitympanum and sinus tympani are notoriously difficult using the microscope, which, although providing a very clear magnified view of the surgical field, is limited by the line-of-sight view inherent in its design. Thus, it is disease in these areas that is more appropriately addressed by EES. Although the advantages are greatest in these anatomical regions, the benefits of the endoscope are apparent in all parts of the middle ear. As a result of the superior view offered by the endoscope, it can be argued that the question of patient or case selection should not be decided in terms of the type, nature, or extent of disease, but, rather, which tool should be used where and at what point during the surgery. Performing a mastoidectomy to remove extensive cholesteatoma from the mastoid is not best undertaken with an endoscope, and the middle ear is not best suited to the microscope. Therefore, it is useful to address disease within the middle ear endoscopically and then switch to a microscope to remove disease that is beyond the reach of an entirely endoscopic approach. Preoperative imaging will help the surgeon plan the expected flow of the operation (▶ Fig. 44.1). 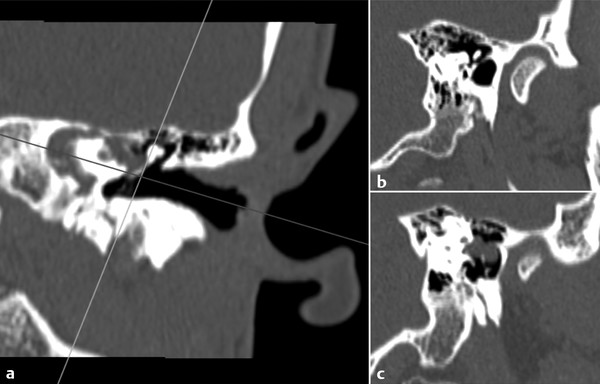 The use of the endoscope in the management of middle ear disease has allowed the more careful examination of the hidden structures of the mesotympanum and epitympanum. In many cases, these insights amount to rediscoveries of anatomical features that have been previously described, but were not able to be fully understood in the context of middle ear surgery given that they were not easily identified during surgery with the operating microscope (▶ Fig. 44.2). 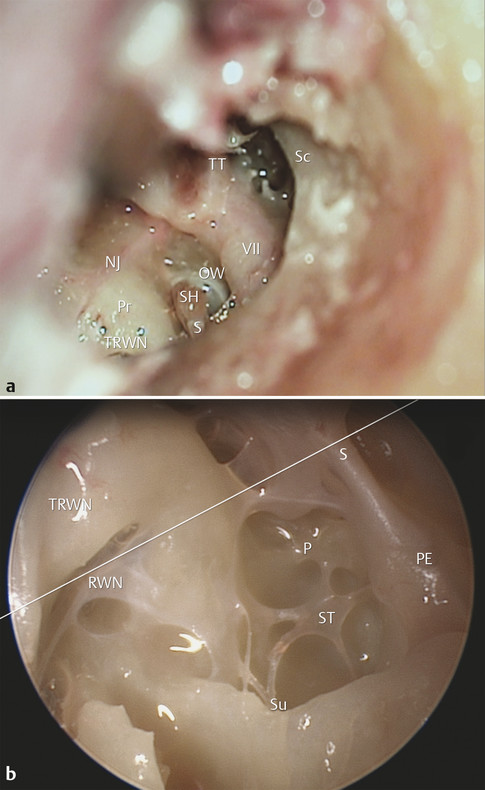 The wide angle of view and the use of angulated endoscopes have allowed a more detailed examination of the sinus tympani that informs surgical planning. In their work on describing the morphology of the sinus tympani, Marchioni et al13 describe a classification system of the sinus tympani in relation to its depth relative to the facial nerve (▶ Fig. 44.3) and its morphology relative to surrounding structures, subdividing it into normal shape, confluent shape, and partitioned shape. Knowledge of these configurations allows disease to be removed from the sinus tympani with greater confidence owing to the benefits of a comprehension of the complex interrelationships between structures such as the styloid eminence, ponticulus, and subiculum (see Chapter 7). 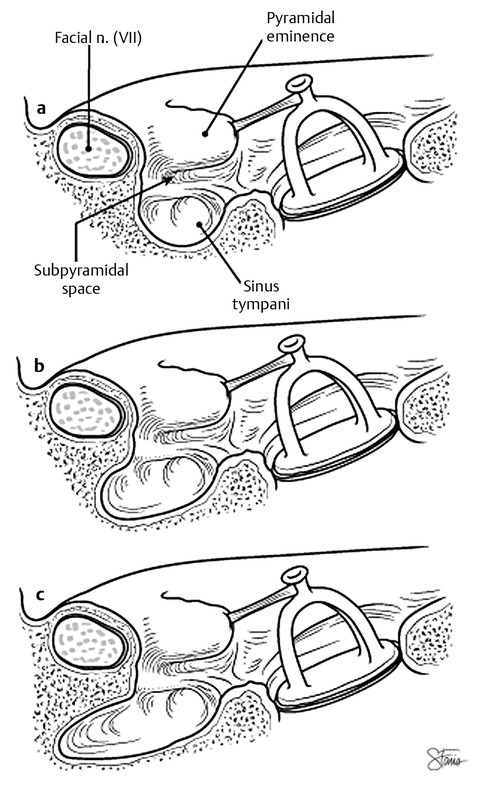 Although originally described by Aimi et al14 in 1978, the anatomy of the anterior and posterior tympanic isthmus came to the attention of endoscopic surgeons who were now able to clearly assess these areas without any disruption of the surrounding anatomy (▶ Fig. 44.4). Marchioni et al describe the endoscopic anatomy of the ventilation pathways of the middle ear, with particular attention being paid to the endoscopic anatomy of the anterior and posterior tympanic isthmus, showing the role that blockage of these routes for ventilation of the epitympanum and mastoid air cell system has on the development of retraction of the tympanic membrane and cholesteatoma (see Chapter 7).15 This is described in greater detail in another paper by the same group with emphasis on the improved access afforded by the endoscope when assessing these areas.16 Prussak’s space plays a major role in the development of cholesteatoma, with its genesis in the pars flaccida; although the pathways for ventilation of this space have been described previously, the endoscopic anatomy of this region of the middle ear has expanded knowledge of the physiology of the ventilation of the middle ear17,​18 and has provided advantages in ear surgery designed to improve ventilation along with the extirpation of middle ear disease. 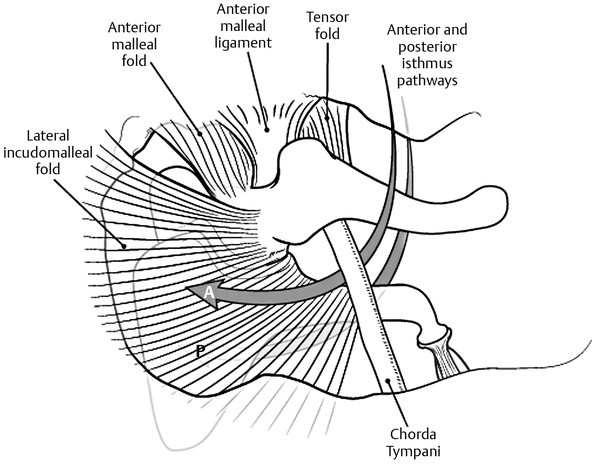 Another structure that has been, until recently, considered of limited importance beyond obscure anatomical knowledge is the tensor fold, a mucosal structure that originates at the cog of the epitympanum and extends to the tendon of the tensor tympani. Depending on the morphology of the anterior epitympanum and the supratubal recess, this structure can range from near horizontal to near vertical and can play an important role in the dysventilation of the epitympanum, given its proximity to the Eustachian tube.15,​19

The choice of endoscope involves a necessary trade-off between the field of view it provides and its diameter. Smaller-diameter endoscopes can be used more easily than wider endoscopes alongside other instruments in the ear canal, but they produce a far smaller image and are able to supply less light owing to their limited ability to carry sufficient fiberoptic light bundles alongside their lenses. Current technology limits the surgeon to a choice of diameters ranging from 2.7 mm to 4 mm. Most endoscopic ear surgeons favor the 3-mm diameter rigid endoscope as a good compromise between view and bulk.

Traditional oto-endoscopes have been manufactured to a length of 6 cm. These endoscopes are very useful for the examination and photodocumentation of ears in the outpatient department but are of little use in EES. Using the endoscope as a surgical tool requires that the endoscope and camera head attached to the endoscope are as unobtrusive as possible. Short endoscopes cause the surgeon’s hands to occupy the same area of the operative field, interfering with the endoscope and making it very difficult to direct the surgical instruments to the intended place when the endoscope is obstructing the trajectory of the instrument. For this reason, it is preferable to use an endoscope that is between 14 cm and 18 cm in length (▶ Fig. 44.5). This allows the endoscope to be further from the operative area than the hand that holds the instrument and, consequently, causes no difficulties with maneuverability. 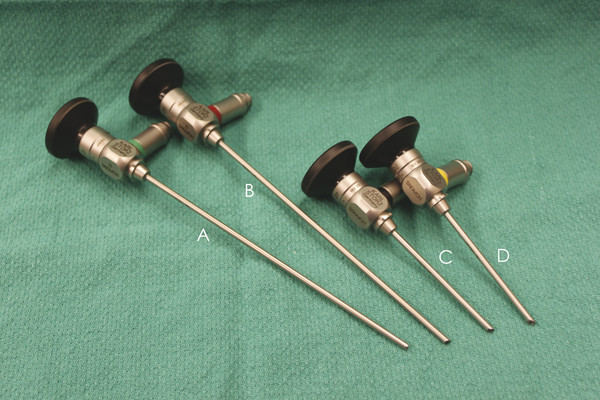 Fig. 44.5 Endoscope lengths. Traditionally, endoscopes designed for use in the ear have been short (~6 cm in length). Although these are valuable for examining the ear and for photodocumentation, the newer 14-cm endoscopes (a) and (b) are easier to use for surgical applications. The shorter endoscopes (c) and (d) are more difficult to use in combination with a surgical instrument.

Most EES is performed with a 0-degree endoscope. The wide field of view allows access to all but the most hidden areas on of the epitympanum and retrotympanum; indeed, the entire middle ear space of some ears can be completely inspected without the need to convert to an angled endoscope. If the anatomy of the patient dictates the need for an angled endoscope to achieve a suitable view of disease, the choice will be between a 30-degree, 45-degree, or, in rare circumstances, a 70-degree endoscope. The choice of angle is dependent on personal preference, but a good rule of thumb is that the smallest angle that produces a satisfactory view should be used. The 70-degree endoscope is particularly difficult to control in the middle ear and should be reserved for cases where extensive removal of disease has already taken place (▶ Fig. 44.6). 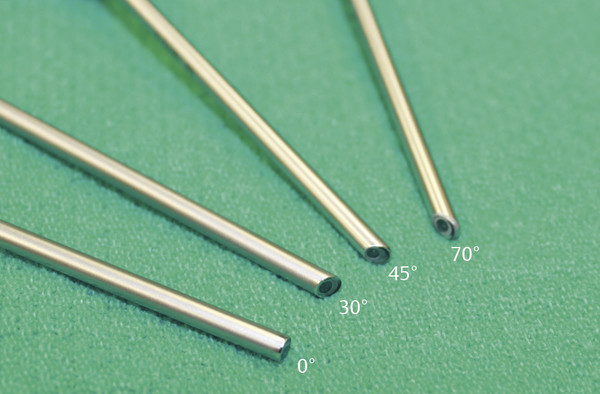 Fig. 44.6 Endoscope angles. Rigid endoscopes are commonly produced with angles of view of 0, 30, 45, and 70 degrees. The majority of EES is performed with a combination of 0- and 45-degree endoscopes. The range of angles is shown from smallest (0 degrees) on the left of the image to the largest (70 degrees) on the right.