Branch retinal vein occlusion (BRVO) is a common, visually disabling disease. It was first described by Leber in 1877 [1]. Since then, an enormous amount of literature on its various aspects has accumulated. A review of that is often confusing, unfortunately, because of one major problem: the majority of the studies have combined all types of retinal vein occlusions into one group, rather than separately describing the findings on BRVO specifically. I will discuss BRVO to provide the latest information on this important disease where available.

BRVO has always been considered as one disease. However, my studies [2–6] have shown that it actually consists of two distinct clinical entities: major BRVO (Fig. 26.1) and macular (Fig. 26.2) BRVO, as will be evident from the clinical discussion below. 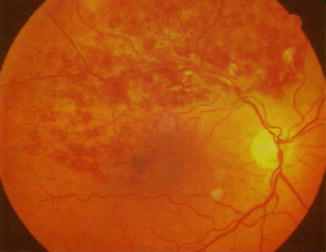 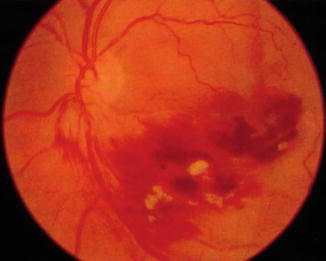 Fundus photograph of inferior nasal macular BRVO. It shows extensive preretinal hemorrhages and a few cotton-wool spots in a patient on aspirin (Reproduced from Hayreh [7])

There is a voluminous literature describing systemic conditions associated with BRVO. Following is a brief summary. It is beyond the scope of this chapter to review and discuss all of the extensive, often contradictory, literature on the subject.

Prevalence of Systemic Diseases at Onset of Major BRVO

In major BRVO, the prevalence of arterial hypertension was significantly higher than in a control population in both men and women in all age groups. The overall prevalence of hypertension in major BRVO patients was 65.7 % compared with only 29.9 % in the gender-matched and age-matched US control population (p = 0.0001). The same relationship was seen in young men with macular BRVO (p = 0.001). In the combined BRVO group, a higher prevalence of cerebrovascular disease (p = 0.050; 5.9 % compared with 1.5 %) and chronic obstructive disease (p = 0.004; 9.4 % vs. 2.3 %) was observed in middle-aged men than in the US control population. Peptic ulcer was found to be more prevalent in middle-aged and elderly male and female patients. The overall prevalence of peptic ulcer in patients with BRVO was 10.9 % compared with 2.7 % for the age-matched and gender-matched US population (p < 0.0001). An overall higher prevalence was seen for thyroid disorder (p = 0.001; 6.0 % vs. 2.8 %) and for ischemic heart disease (in major BRVO only, p = 0.038; 13.2 % vs. 9.3 %) than in the US population.
Because our patient population was predominantly white, the prevalence of systemic conditions in patients with retinal vein occlusion was also compared with the US white control population. These comparisons were done by matching only by age, because published prevalence data were stratified only by age groups but not by gender. Similar results were obtained in the gender-matched and age-matched comparison with the general US population. The patients with BRVO had a significantly higher overall prevalence of arterial hypertension compared with the US white age-matched control population. The patients with BRVO also showed a greater prevalence of cerebrovascular disease (6.3 % vs. 3.5 %; p = 0.007), chronic obstructive pulmonary disease (5.2 % vs. 2.8 %; p = 0.012), peptic ulcer (10.9 % vs. 2.7 %; p = 0.0001), diabetes (in the young only, 18.8 % vs. 0.7 %; p = 0.0005), and thyroid disorder (6.0 % vs. 3.1 %; p = 0.003) compared with the US white age-matched control population.
While comparing the findings of our study with those of other studies on the subject, it is pertinent to point out that the design of our study differs markedly from all the other studies. The designs of the other studies also differ from each other. Study design determines the outcome of a study, so that it is hard to make any valid comparison between the various studies. Any comparison is bound to create unnecessary controversy and confusion.
I have discussed in previous chapters the findings about systemic diseases associated with CRVO and hemi-CRVO. There are some common misconceptions about the relationship between the finding of associated systemic diseases in patients with a particular disease and their role in its pathogenesis. There is an almost universal tendency to consider an association as a cause or to blame one or two factors as causative of the development of various types of retinal vein occlusion. One has to remember that association does not necessarily mean cause and effect; the possibility of a chance occurrence of some of these disorders in the retinal vein occlusion cases cannot be ruled out. Available evidence strongly suggests that the pathogenesis of various types of retinal vein occlusion, like many other ocular vascular occlusive disorders [16], is a multifactorial process and there is no single “villain” that causes retinal vein occlusion. It would seem that some risk factors predispose an individual or an eye to develop retinal vein occlusion (predisposing factors) and others act as the final insult (precipitating factors), to produce a clinically evident disease. The various risk factors for various types of retinal vein occlusion may be systemic, hematologic, or local, and the latter may be in the eye or in the involved retinal vein itself; they may vary widely from one type of retinal vein occlusion to another, from person to person, or even from eye to eye. It is not necessary for every person with retinal vein occlusion to have the same combination of risk factors nor, conversely, for persons with some or all of the same risk factors to develop retinal vein occlusion. Once an eye and an individual have the critical number or intensity of risk factors required for the development of a particular type of retinal vein occlusion, that type of retinal vein occlusion develops. This explains why patients rarely develop bilateral retinal vein occlusion, and even in the same eye it is rare to have more than one type of BRVO or hemi-CRVO [3]. The retinal venous occlusive process would not be so very localized and individualized if, as is often claimed, only one or two particular hematologic or systemic factors were causative; in that case, surely, the involvement of the retinal veins would be widespread in an individual, involving both eyes or, in the case of BRVO or hemi-CRVO, other retinal veins in that eye.
Once this basic concept is understood, one can attach appropriate significance to the various risk factors. It is possible that some systemic diseases and hematologic abnormalities may sometimes play some role in some persons and in some of the retinal vein occlusions, but not necessarily all or most of the time in all types of retinal vein occlusions. Moreover, the role played by various abnormalities may vary from eye to eye and from one type of retinal vein occlusion to another. For example, in BRVO as compared with CRVO, the prevalence of arterial hypertension (p < 0.0001) and peripheral vascular disease (p = 0.0002) is significantly more common, which would suggest that probably the arteriosclerotic changes in the retinal arterioles (at the arteriovenous crossing) may play a role in the development of BRVO but not of CRVO, because the central retinal artery and vein in the optic nerve lie side by side and do not cross one another. Thus, the root of the controversy and confusion on the role of these abnormalities in the development of retinal vein occlusion may be an oversimplified and generalized notion about complex multifactorial phenomena.

My study [4] revealed that a variety of systemic disorders may be present in association with the six types of retinal vein occlusion (i.e., nonischemic and ischemic CRVO, nonischemic and ischemic hemi-CRVO, major and macular BRVO) and in different age groups and that their prevalence differs significantly, so that the common practice of generalization about these disorders, covering the entire range of patients with retinal vein occlusion, can be misleading. The presence of a particular associated systemic disorder does not necessarily have a cause-and-effect relationship with that type of retinal vein occlusion; it may well be simply a chance occurrence. Available evidence strongly suggests that the pathogenesis of various types of retinal vein occlusion is a multifactorial process, with some factors predisposing an eye to develop a particular type of retinal vein occlusion and others acting as precipitating factors, finally causing the development of retinal vein occlusion. There is no single factor that causes retinal vein occlusion. The presence of a particular systemic disorder or hematologic abnormality may or may not be one of the risk factors in the multifactorial scenario for the development of a particular type of retinal vein occlusion. Based on my study, I think that, apart from a routine medical evaluation, an extensive and expensive work-up for systemic diseases is unwarranted in the vast majority of patients with CRVO, hemi-CRVO, and BRVO.
Over the recent years, there have been a number of anecdotal case reports of BRVO with many systemic diseases, including Bartonella [17], Behcet’s disease [18, 19], Coats’ disease [20], Crohn’s disease [21], deep-sea diving [22], Eales’ disease [23], focal retinal phlebitis [24], high altitude [25], human immunodeficiency virus [26, 27], infliximab treatment [28], interferon therapy [29], lipemia retinalis [30], during fingolimod treatment of multiple sclerosis [31], ocular candidiasis [32], ocular Lyme borreliosis [33], ocular tuberculosis [34], primary intraocular lymphoma [35], pseudoexfoliation [36, 37], quetiapine fumarate [38], sarcoidosis [39–42], superior ophthalmic vein thrombosis [43], systemic lupus erythematosus [44], Takayasu’s arteritis [45], tamoxifen [46], toxoplasmic chorioretinitis [47], Tsutsugamushi disease [48], and Waardenburg syndrome [49]. As discussed above, the association of a condition with a systemic disease does not always mean cause and effect.

A tremendous amount of literature has accumulated over the years on hematologic abnormalities associated with BRVO, but in most reports, unfortunately, BRVO and CRVO have been grouped together as one disease, as if they have a similar pathogenesis and risk factors, which is not the case. Moreover, many reports are based either on anecdotal cases or on retrospective retrieval of information from case records of variable numbers of patients seen in routine clinical practice, with only a few planned studies. In view of that, the role played by various hematologic abnormalities in etiology and pathogenesis of BRVO still remains controversial.
I [50] investigated hematologic abnormalities in 133 (95 major and 38 macular) BRVO patients by routine studies, in 27 platelet aggregation, in 30 antithrombin III, and in 33 α2-globulin studies. The findings are discussed at length elsewhere [50]. There was a significant (p = 0.011) difference in BRVO of the prevalence of abnormal uric acid. The gender- and age-adjusted comparison of elevated serum cholesterol with that in the US population rates [51] showed no difference. The other tests showed no abnormality. There was no significant difference in the prevalence of abnormal circulating and spontaneous platelet aggregation, antithrombin III, or α2-globulin findings.
I also critically reviewed the literature dealing with hematologic abnormalities in BRVO [50]. In most of the studies, all types of retinal vein occlusion have been combined. There are a large number of positive as well as negative studies dealing with anticoagulant proteins, activated protein C resistance and factor V Leiden mutation, antiphospholipid antibodies, methylenetetrahydrofolate reductase mutation and anticardiolipin antibodies, platelet aggregation disorders, other clotting abnormalities, hyperhomocysteinemia, plasma viscosity, and hyperlipidemia. Following are some examples of more recent studies showing negative results about the association of various thrombophilic factors in BRVO. Weger et al. [52] in a study of 294 patients with BRVO and 294 control subjects investigated the role of thrombophilic gene polymorphisms and concluded that these polymorphisms are not major risk factors for BRVO. Kalayci et al. [53] in their study did not find factor V Leiden and prothrombin G20210A mutations as risk factors. Similarly, Demirci et al. [54] in their study found no clear association between retinal vein occlusion and factor V Leiden in this pool of patients and concluded that factor V Leiden does not seem to play an important role in the development of retinal vein occlusion. Risse et al. [55] in a study of 51 patients with BRVO on age-, gender-, and C-reactive protein-adjusted logistic regression analysis did not find a significant additive effect of elevated factor VIII activity on the risk of developing BRVO. Mrad et al. [56] in 68 patients with BRVO found no statistically significant differences in the frequencies of the prothrombin G20210A polymorphism between the BRVO group and healthy controls. Sartori et al. [57] reported that cardiovascular but not thrombophilic risk factors seem to be influenced by age in retinal vein occlusion patients. Pinna et al. [58] in 42 patients with BRVO and 33 with CRVO failed to demonstrate an association between increased plasma homocysteine and retinal vein occlusion.
Only gold members can continue reading. Log In or Register to continue