Amblyopia is the most common cause of visual impairment in children: it often persists into adulthood. The prevalence in childhood is estimated to be 1−4%. It is considered to be the leading cause of monocular vision loss in the 20- to 70-year-old age group.1 The prevalence of visual loss from amblyopia was 2.9% in one study of adults, indicating the need for improved treatment.2 Amblyopia is defined as a “decrease of visual acuity caused by pattern vision deprivation or abnormal binocular interaction for which no causes can be detected by the physical examination of the eye and which, in appropriate cases, is reversible by therapeutic measures.”3 Amblyopia may be unilateral or less often bilateral.

Most cases are associated with eye misalignment, usually esotropia in infancy or early childhood, others with anisometropia, or a combination of strabismus and anisometropia (Table 70.1).

Table 70.1 Association of amblyopia with strabismus and/or amblyopia

Precise percentages vary depending on how amblyopia is defined.

The gold standard for detection is measurement of visual acuity using a crowded or linear letter optotype test. Single optotype presentation and picture optotypes are less sensitive and should be used only when a child is unable to perform a test using surrounded or line optotypes. Tests based on the four letters “H”, “O”, “T”, and “V” in a box or with contour surround bars are the basis of several popular test strategies.10,11 A defined protocol for testing children with single-surround HOTV has been developed by the Pediatric Eye Disease Investigator Group.11 The strategy includes a second chance at threshold determination and a portion designed to get the child back on track with some larger above threshold stimuli. It has good testability, test−retest reliability, and has been automated.12

For children unable to perform with letter optotypes, clinicians have commonly used picture optotypes. However, standard picture optotypes overestimate the visual acuity of amblyopic eyes and are not recommended for screening or diagnosis of amblyopia. Dr. Lea Hyvärinen designed four picture-like optotypes13 to have similarities between optotypes and have contours like the Landolt C making them more difficult to successfully recognize. The objects (apple, circle, house, square) chosen are common in Western children’s experience and eliminate cultural biases in that population. In one study the single-surrounded Lea tests systematically overestimated acuity by 1.9 lines compared to the crowded Landolt C in normal eyes.14 A comparison of the Lea symbols to line optotypes in amblyopic eyes has not been thoroughly studied.

Forced choice preferential looking using Teller acuity cards has been used as an alternative method for infants and non-verbal infants.16 This test is time consuming and requires an experienced tester to assure reliable results. Unfortunately, this test systematically underestimates amblyopia, reducing its clinical utility as a means of screening or detecting a successful treatment endpoint.17

There are few data comparing the outcomes of amblyopia treatment to the natural history. Clinicians have noted improvement of acuity when children complied with therapy, but found little improvement when no therapy was actually completed. Simons and Preslan reported that among a case series of amblyopic patients, who were not treated, there was no improvement in visual acuity.18 However, such a demonstration of improvement in acuity of the amblyopic eye without concurrent untreated or natural history controls is not sufficient to prove a benefit of therapy. This deficiency led to a recommendation in the United Kingdom to stop screening for amblyopia as well as treating it because of a lack of a proven benefit.19 A recent retrospective, non-randomized study suggested that there is value. A group of strabismic patients with amblyopia were treated with spectacles alone (n=17) or spectacles plus occlusion therapy (n=69).20 Though both treatments led to improvement, the visual acuity improved more in the patients treated with occlusion.

It is likely that some of the improvement in acuity reported in uncontrolled studies of amblyopia therapy represents a combination of age and learning effects in addition to actual treatment benefit., However, the magnitude of the age and learning effect, which has been reported to be about 0.14 logMAR lines over 6 months in a prospective clinical trial, is far less than the improvement typically reported following treatment of amblyopia.21

A randomized clinical trial (Amblyopia Treatment Trial, UK) was undertaken to compare an untreated control group of anisometropic amblyopia with a group of children treated with glasses and a third group treated with glasses and occlusion. This study found slight improvement with about one line between no treatment and treatment with glasses and occlusion.22 The cause of the visual loss was not known with certainty in each child. In addition, the control group’s visual acuity at baseline and at final measurement was without correction, whereas the treatment group was measured with best spectacle correction.

The initial intervention is always to prescribe any necessary spectacle correction. Logically one should not diagnose amblyopia until refractive correction is prescribed, the glasses obtained, and the visual acuity deficit confirmed with the correction being worn. The precise guidelines for prescribing spectacles for amblyopia vary with clinician’s practice and the age of the child, but the clinician should correct any anisometropia of greater than 0.50 D and astigmatism of 1.50 D in any patient in whom amblyopia is suspected. Hypermetropia should be fully corrected in younger strabismic patients and corrected with the plus sphere reduced by up to 1.50 D in orthotropic patients. Myopic errors should be fully corrected during office testing with trial frames to confirm the diagnosis, though the prescribed minus sphere may be cut for infants and toddlers.

When should one start additional therapy such as occlusion? Some clinicians prescribe such therapy immediately, some wait a specified time, others wait until improvement with spectacles alone ceases. Moseley et al. found that 8 of 12 patients prescribed spectacles for the first time improved 3 or more lines in the amblyopic eye.23 The Pediatric Eye Disease Investigator Group (PEDIG) reported that amblyopia improved in previously untreated anisometropic patients (n=84) with optical correction by at least 2 lines in 77% of the patients and resolved in 27%.24 Improvement took up to 30 weeks for stabilization. In a pilot project, subjects with strabismic amblyopia experienced similar improvement.

We prefer to prescribe any necessary spectacle correction and then wait for at least 6 weeks to re-evaluate the acuity. A measure of the visual acuity in trial frames when the glasses are prescribed can be helpful in assessing the vision status at the first follow-up visit. As long as the acuity is improving, we continue with just glasses before prescribing additional therapy. This graduated approach is likely to improves patient compliance with each portion of the therapy.

Occlusion therapy has been the mainstay of treatment for a century despite the lack of meaningful data demonstrating its superiority over other modalities. This therapy commonly employs an adhesive patch placed over the fellow eye so that the amblyopic eye must be used. Opinions vary on the number of hours of patching per day that should be prescribed, ranging from a few hours to all waking hours.1,3,25–28

Flynn et al. found that the success rates were the same for part-time and full-time occlusion therapy based on reported outcomes in 23 studies.29 Cleary reported in a very small study that full-time occlusion produced a greater improvement in visual acuity and reduction in interocular difference than part-time occlusion, when the acuity outcome was measured at 6 months.20

Several authors have reported significant improvement in visual acuity using brief daily periods of occlusion (20 minutes to 1 hour).30,31 Campbell et al. noted that 20 minutes per day was effective in improving the vision of 83% of children to 6/12. These authors reported that vision can improve rapidly following brief periods of occlusion, especially when combined with concentration on hard tasks.32

The dosages prescribed by clinicians during the last few decades vary greatly and seem to be largely a matter of region or training.33 For instance, more hours are prescribed in German speaking countries than in the United Kingdom, yet the same outcome is expected.34 Several clinical trials have evaluated various patching dosages and the outcome of amblyopia treatment.21,35 These are the Amblyopia Treatment Studies, which are prospective multi-center randomized controlled clinical trials, being conducted by PEDIG in North America. The studies have included only patients with strabismic and anisometropic forms of amblyopia. The first randomized controlled study compared occlusion to atropine treatment. The dosage of occlusion prescribed was a minimum of 6 hours up to full-time, but the investigator chose the actual occlusion dosage. Patients with acuity of 6/24 to 6/30 improved faster when more hours of patching were prescribed, but after 6 months the improvement was not significantly greater than that occurring with fewer hours of patching or with atropine (Fig. 70.1).35 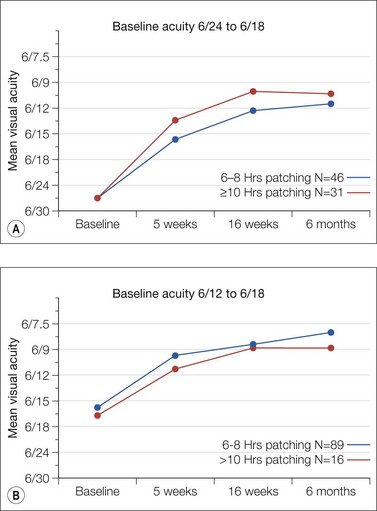 Additional prospective randomized trials compared the efficacy of different occlusion dosages. There are two distinct studies, one for moderate amblyopia 6/12 to 6/24, and one for severe amblyopia 6/30 to 6/120, caused by strabismus, anisometropia, or both.36,37 The studies found that 2 hours of daily patching produces an improvement in visual acuity of similar magnitude to the improvement produced by 6 hours of daily patching in treating moderate amblyopia in children aged 3 to less than 7 years.36 Each treatment group improved 2.4 lines over 4 months. More interesting was the lack of any benefit in terms of the rate of improvement (Fig. 70.2). The visual acuity gain after 4 months probably does not represent the maximum improvement possible. 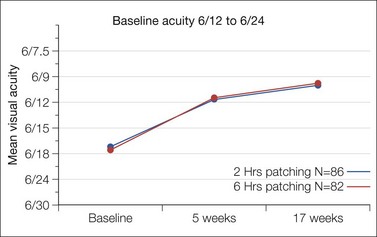 Fig. 70.2 Occlusion dosage of 2 versus 6 hours compared in a randomized controlled trial.36 No increase in therapy was allowed by the protocol. There was no difference in the rate or magnitude of improvement during the 4 months of prescribed treatment.

The study for severe amblyopia found the improvement in the amblyopic eye acuity from baseline to 4 months averaged 4.8 lines in the 6-hour group and 4.7 lines in the full-time group (P = 0.45).37 In a recent study, children with severe amblyopia improved a mean of 3.6 lines with just 2 hours of daily patching for 17 weeks.38

Children’s dislike of occlusion therapy is well known.39 Reported compliance rates range widely. Parents have used coercion and clinicians have prescribed punitive measures such as elbow splints to enhance compliance. Lack of parental understanding seems to play a large role. In the United Kingdom, failure to comply with the prescribed regimen at least 80% of the time occurred in 54% of patients:40 the failure to comply related to the parents’ lack of understanding that there is a “critical period” for effective therapy.

Side effects from occlusion are uncommon, usually minor skin irritation or the social stigma of a patch.21 Adhesive sensitivity to the patches does occur. The clinician should discontinue the patch and treat with an emollient facial cream. Rarely, topical hydrocortisone may be needed.

More serious is occlusion amblyopia, a decrease in vision in the fellow (patched) eye of more than one line. It is more common with more intense therapy and longer treatment intervals, especially if the patient is lost to follow-up. In one prospective study in which the majority of patients were treated with 6 or 8 hours of occlusion per day,21 only 1 of 204 patients was diagnosed with reverse amblyopia. In most cases occlusion amblyopia is reversible simply by stopping the treatment. Rarely, amblyopia therapy is needed for the originally non-amblyopic eye.

The value of occlusion therapy is well established for anisometropic and strabismic amblyopia. The clinician and the parents should discuss the dosage of occlusion to be prescribed. The number of hours prescribed should be based on many factors including compliance and life-style.