The Pathology of Otosclerosis

The Pathology of Otosclerosis

Otosclerosis is a primary and exclusive disease affecting only the otic capsule and the ossicles. It is a localized disorder of bone metabolism of the otic capsule avascular endochondral bone that is characterized by disordered resorption and deposition of bone. Otosclerosis occurs only in the temporal bone (Wang et al 1999).

Alterations in vascularity (either an increase or a decrease in blood supply) have been postulated by Witmaack (1930), Wolff (1950), and Mendoza and Ruis (1966) to play a role in the etiology of otosclerosis. Intrinsic and extrinsic mechanical stresses as the result of an erect posture were once considered (Mayer 1917) as a cause of otosclerosis, because the petrous pyramid is located at the base of the skull. Because it was located at the base of the skull, it was subjected to mechanical strains exceeding the physiological limits of tolerance, which resulted in defects in the endochondral layer of the bony labyrinth. It was further theorized that the stress factors appeared during the phylogenic and otogenic development due to rotation of the petrous bones at the base of the skull. It was thought that the cochlea moved forward and upward and the vertical semicircular canals backward and downward. Thus, the petrous pyramid has an almost horizontal position in humans versus a vertical position in quadrupeds. This theory was abandoned because otosclerotic changes first appeared in the footplate of the stapes. Fowler (1949) suggested that otosclerosis might be an expression of a general mesenchymal hypoplasia. This was further supported by Ogilvie and Hall (1962), who postulated that otosclerosis was a local manifestation of osteogenesis imperfecta. In recent times viral infections and autoimmune factors have also been postulated to trigger the otosclerotic processes.

Ruedi (1963) demonstrated shunts between the vascular system of the otosclerotic bone and the inner ear, and suggested that venous stasis from these shunts might be responsible for sensorineural hearing loss.

It is difficult to assess the true onset of otosclerosis because the development of histopathologic changes is gradual. Clinical otosclerosis is commonly seen between the ages of 30 and 40 (Nager 1969), with the average age of presentation being 33. DeJuan (1960), comparing the age of onset among various age groups, noted that 28% of cases occurred between ages 18 and 21, 40% presented between ages 21 and 30, and 22% presented between ages 31 and 40. The clinical presentation of otosclerosis is usually that of a conductive hearing loss, which may be unilateral or bilateral. Occasionally it may present as a sensorineural hearing loss. The onset of hearing loss is usually between the fourth and fifth decades, with a higher prevalence in women than men (in the ratio of 2:1). Hearing impairment reaches its maximum in the third decade and then usually remains stable (Glorig and Gallo 1962).

Otosclerosis is thought to be more prevalent in women. Schmidt (1933) quoted a female preponderance of 72.5% incidence, whereas Shambaugh (1952) found an incidence of 68% and Cawthorne (1955) an incidence of 67% of women who developed otosclerosis. Because otosclerosis is not a genetically sex-linked characteristic, a ratio of 1:1 would have been expected. However, this has not been found to be true. Endocrinologic factors have been suspected in women. Hueb et al (1991) found a higher incidence of bilateral otosclerosis in women than in men, thus prompting them to believe that women would be more likely to seek medical advice than men. This might possibly account for the apparent gender predisposition.

DOES OTOSCLEROSIS PRESENT ONLY AS A CONDUCTIVE HEARING LOSS?

Temporal bone studies have shown that involvement of the endosteal portion of the cochlea is associated with sensorineural hearing loss and diminished bone conduction hearing thresholds (Ghorayeb and Linthicum, 1978; Hueb et al, 1991). Hyalinization of the spiral ligament adjacent to the otosclerotic foci has been shown to be associated with sensorineural hearing loss (Antoli-Candela et al 1977; Gussen 1975; Hinojosa and Marion 1987).

Otosclerotic foci can sometimes be seen on high-resolution computed tomography (CT) scans of the temporal bone as areas of hypodensity of the otic capsule or in the vicinity of the oval window (Valvassori 1993). CT scanning, however, is not reliable in detecting otosclerosis, especially when the lesions are sclerotic (Thiers et al 1999). It is possible that future advances in CT imaging and densitometry may be more sensitive in the detection of these lesions. Otosclerotic lesions may also show contrast enhancement on magnetic resonance imaging (Ziyeh et al 1997).

Otosclerosis, or otosclerotic-like lesions of the footplate and otic capsule, has been observed in other inherited bone disorders. Otosclerosis is also seen in some patients with osteogenesis imperfecta who commonly develop conductive hearing loss. The lesions in the temporal bone appear similar to those of otosclerosis (Nager 1988), although some patients have lesions consisting of diminished calcification and microfractures. The bony lesions of Paget’s disease in the otic capsule may appear similar to otosclerosis, although their distribution within the temporal bone is distinct (Fig. 2–2). Large multinucleate osteoclasts are much more prominent in Paget’s disease than in otosclerosis. It must be stated that the conductive hearing losses sometimes associated with Paget’s disease are not due to ossicular lesions, but may be due to the loss of mineral density in the otic capsule (Khetarpal and Schuknecht 1990). Paget’s disease of the bone, like otosclerosis, is a disorder of localized bone remodeling, with osteoclastic resorption followed by compensatory increases in bone formation. Paget’s disease affects localized regions of the skeleton while sparing others; however, unlike otosclerosis, it is not restricted to the temporal bone. Thirty percent of those suffering from Paget’s have a family history of the disease, causing speculation about a genetic basis of this disease. There is recent evidence from linkage studies that chromosome 18 carries a predisposition gene for Paget’s disease (Leach et al 1999). In addition, there is compelling evidence of a viral etiology in Paget’s disease (Mills et al 1994). Paget’s disease may cause conductive and/or sensorineural hearing loss by involvement of the otic capsule and ossicles. Otosclerotic-like changes have also been described in CamuratiEngelmann disease (CED) (Chole and McKenna 2001). CED, also known as progressive diaphyseal dysplasia, is a rare disorder of rapid bone turnover, diaphyseal hyperostosis, and muscle hypoplasia. Affected individuals commonly experience mixed hearing loss and vertigo. Radiologically, lesions similar to otic capsule otosclerosis have been seen (Hanson and Parnes 1995; Huygen et al 1996). 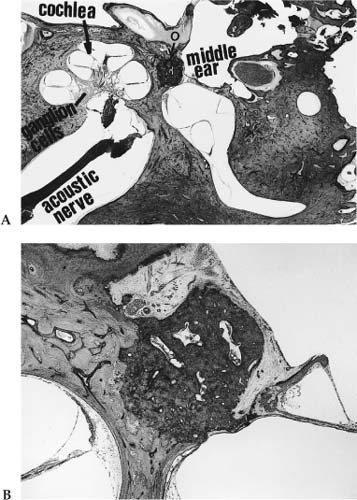 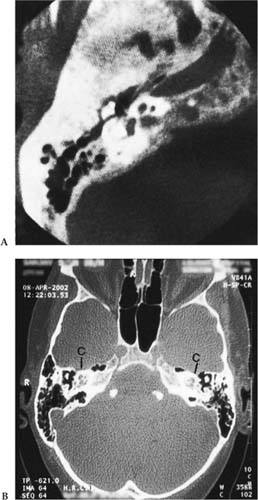 Otosclerotic foci are commonly found in front of the oval window. This location has been reported in 80 to 90% of temporal bones with otosclerosis (Guild 1944). The second most common site is the round window (Fig. 2–3). Very rarely will the round window be occluded by otosclerosis, with complete obliteration of the round window accounting for 6% of temporal bones examined (Hueb et al 1991). Reports of round window involvement range from 30 to 50% (Guild 1944; Nylen 1949). It was also noted, however, that despite being very close to the round window, otosclerotic focus merged in approximately 12% of cases (Nager 1969). The surgical findings of extensive otosclerosis obliterating the round window have been reported to be approximately 1%. Shea and Farrior (1987) reported this finding in 30,000 patients who had undergone stapedectomy. Schuknecht and Barber (1985) reported involvement of the round window in 30% of cases of clinical oto-sclerosis and 17% of temporal bones of histologic otosclerosis. Other sites that were involved were the apical medial wall of the cochlea, posterior to the oval window, the posterior internal auditory canal, the cochlea aqueduct, and the semicircular canals. In the same report, involvement anterior to the oval window as the only focus was seen in 51% of cases of clinical oto-sclerosis. Involvement of the malleus and incus, though uncommon, can cause fixation of the head of the malleus in the attic.

Otosclerosis usually affects both temporal bones symmetrically. Nylen (1949) found that 70 to 80% of cases were involved bilaterally and were symmetrical in the areas of involvement. Nagen (1947) found histologically unilateral otosclerosis in 10% of temporal bones. 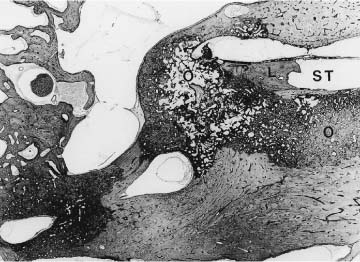 ANATOMY OF THE OTIC CAPSULE

The fossula post fenestram is an evagination of the periotic tissue into the cartilaginous capsule just posterior to the oval window. The fossula is also commonly involved by otosclerotic lesions.

Tags: Otosclerosis and Stapedectomy
Jun 30, 2016 | Posted by admin in OTOLARYNGOLOGY | Comments Off on The Pathology of Otosclerosis
Premium Wordpress Themes by UFO Themes
WordPress theme by UFO themes