Audiological Evaluation of the Patient with Otosclerosis

Audiological Evaluation of the Patient with Otosclerosis

The audiological pattern in otosclerosis is unique. The patterns of abnormalities can be directly explained by alterations in the middle ear transfer function produced by stapes fixation (Harrell 2002).

Pure tone audiometry is the most basic test that should be performed with any patient presenting with impairment in hearing. It should be remembered, however, that it is a subjective test, and the results can vary from laboratory to laboratory. Nonetheless, it is the most important audiological test.

The most prominent audiological characteristics of otosclerosis are elicited with the use of low-frequency stimuli (Hannley 1993). The primary acoustic consequence of otosclerosis in its early stages is the increase in the stiffness reactance component of the total middle ear impedance. This results in a reduction of transmission effectiveness for low frequencies, as seen in elevated thresholds. Another effect is that the resonant frequency of the middle ear is elevated (Beales 1981).

In the early stages, a gradually progressive low-frequency conductive hearing loss is first seen. Initially, patients may be unaware of such a hearing impairment until it crosses the 25 dB range. The hearing loss may be confined to frequencies below 1000 Hz; high frequencies are typically unaffected at this stage. This characteristic rising audiogram configuration has been referred to as the “stiffness tilt.”

As the footplate becomes completely fixed and the otosclerotic focus proliferates, a mass effect is added to the audiogram. The low-frequency hearing loss does not increase and appears to stabilize. The hearing loss progresses in the high frequencies, however, and there is a gradual widening of the air-bone gap. The audiogram configuration now changes to a flat pattern from the upward-sloping pattern that it had in the early stages. In the absence of cochlear involvement, the pure conductive hearing loss produced by the complete stapes fixation is limited to 60 to 65 dB, with a maximum air-bone gap across the frequency range. 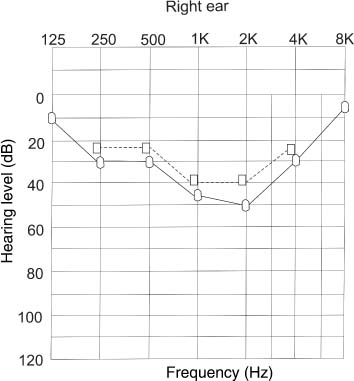 In cochlear otosclerosis, air conduction thresholds continue to worsen, and the loss starts to become mixed or sensorineural, with the high frequencies becoming severely affected. The typical pattern of cochlear otosclerosis in the early stages is the “cookie bite” pattern (Fig. 4–1), where the greatest degree of hearing loss occurs in the midfrequency hearing range and is characteristically a mixed hearing loss (Hannley 1993).

Tinnitus is usually present in a large percentage of patients. If the tinnitus is severe, it may interfere with the patient’s ability to respond reliably to pure tone testing. Usage of pulsed or warbled tones may help the patient to identify tinnitus from pure tone test stimuli when being tested.

Although air conduction curves give an indication of the hearing thresholds, and its configuration may give valuable clues to the diagnosis of oto-sclerosis in its early stages, bone conduction audiometry is of great value in the diagnosis of otosclerosis and in the selection of patients for surgery. Bone conduction is especially useful when testing patients suffering from otosclerosis. It reveals characteristics that are typical of otosclerosis, and it also helps to reveal the amount of cochlear reserve in each ear. This helps to determine if stapedial or cochlear otosclerosis is present. This in turn helps the surgeon make a decision as to which ear he or she should operate and helps predict optimum postoperative results.

Carhart’s notch (Fig. 4–2) is thought to be typical of otosclerosis (Carhart 1950, 1962). It is characterized by the elevation of bone conduction thresholds of approximately 5 dB at 500 Hz, 10 dB at 1000 Hz, 15 dB at 2000 Hz, and 5 dB at 4000 Hz. It was previously thought that this was due to the inertial component of bone conduction caused by stapes fixation. The contribution of the inertial component is maximal for frequencies below 800 Hz, however; thus, a greater loss for bone-conducted low frequencies might be predicted. Yet this is not borne out by clinical observation. Another more plausible explanation is that fixation of the stapes disrupts normal ossicular resonance, which in humans is around 2000 Hz. Furthermore, the normal compression mode of bone conduction is disturbed because of the relative perilymph immobility caused by stapes fixation (Tonndorf 1972). Carhart’s notch is a mechanical artifact and is not a true representation of cochlear reserve. Evidence that it is an artifact is seen in overclosure following stapes surgery.

Cross-checks on the validity of bone conduction thresholds include careful consideration of the masking levels. The sensorineural acuity level (SAL) test is used to resolve masking dilemmas.

1. In the Bing test in clinical otosclerosis, there is no shift in loudness when the meatus is occluded or when pressure is varied, as is seen in normal hearing and in sensorineural hearing loss. It is probable that the Bing test is negative in otosclerosis and on other forms of deafness because the middle ear element of bone conduction is attenuated by the middle ear element of hearing loss.

2. It is unusual to find a patient with otosclerosis whose bone conduction thresholds are normal.

Figure 4–3 Pure tone audiogram of two siblings who have a history of otosclerosis. Note the notch at 2000 Hz typical of otosclerosis. (Adapted from Beales, PH. Otosclerosis . Bristol; John Wright and Sons: 1981. Used with permission.)

It was thought that there was an abrupt shift in bone conduction thresholds, and that this may reach its full magnitude when stapes fixation has progressed to the stage at which it causes a mild air conduction loss. Beales (1981) disagreed, finding evidence of a slowly progressive increase in the size of the Carhart’s notch. In chronic otitis media, Carhart’s notch-like effects may occur, but they are much less prominent than those seen in otosclerosis.

Tags: Otosclerosis and Stapedectomy
Jun 30, 2016 | Posted by admin in OTOLARYNGOLOGY | Comments Off on Audiological Evaluation of the Patient with Otosclerosis
Premium Wordpress Themes by UFO Themes
WordPress theme by UFO themes