Diagrammatic representation of the cilioretinal artery, as described by Müller [1]
Table 3.1

It is common to see healthy eyes in which a cilioretinal artery on reaching the disc turns sharply back and disappears under the rim of the sclera, as if running into (or emerging from) the choroid.
2.

The cilioretinal artery is generally very small, but may be as large as one of the main divisions of the central retinal artery.
3.

They are always situated on the temporal side of the disc and pass to the foveal region of the retina.
4.

No practical significance can at present be attached to this peculiarity in the blood supply of the fovea of the retina.
5.

Such a vessel is generally present in only one eye, but it is occasionally seen in both. It is usually single, but may be two in the same eye.
6.

A cilioretinal artery can in most cases be readily distinguished from the other retinal arterial branches (generally of small size), which are often seen to enter (or emerge from) the optic nerve at various points between the temporal border and the physiological pit. In some cases when the vessel disappears very near to the border of the disc, it may be impossible to say whether it passes straight down the nerve or curves around the sclera.
7.

Anatomists do not agree as to whether those vessels, which disappear between the optic disc border and the physiological pit, are branches of the central retinal artery given off before reaching the eyeball or branches of the ciliary vessels.
8.

The cilioretinal arteries do not appear to anastomose with the other retinal vessels either on the retina or optic disc.
9. 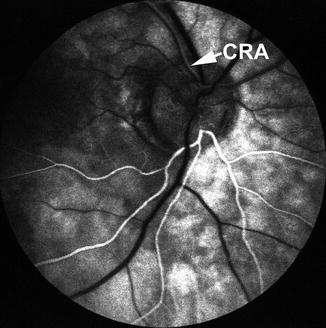 Anatomical Proof of the Presence of the Cilioretinal Artery

This is very rare in the literature. Anatomically this was shown by Müller [35] in one case, Nettleship [2] in one, Randall [5] in one, Birnbacher [30] in one, Fuchs [36] in five, Beauvieux and Ristitch [37] in one, and Wybar [38] in one. Only the last named followed the whole course of a cilioretinal artery in latex casts and conclusively proved that it arises from the posterior ciliary arteries, thus definitely proving it a cilioretinal artery. In my study of two eyes of a rhesus monkey, in serial sections of the optic nerve, I was also able to trace the arteries to their origin from the posterior ciliary arteries, showing them to be true cilioretinal arteries [32]. However, most previous authors have based their statistics and conclusions only on ophthalmoscopic appearances, but, as mentioned above, no absolute reliance can be placed on the ophthalmoscopic findings. Those who have based their observations on the ophthalmoscopic appearances have found the cilioretinal arteries to be very common, whereas a detailed anatomical examination of 72 eyes [17, 18] revealed no such artery (though such a negative observation is to be taken cautiously). Similarly, the anatomically based reports of the incidence of cilioretinal arteries in the rhesus monkey also seem to be low, because no example was found in about twenty eyes examined both ophthalmoscopically and either histologically or by latex injection [39].