Stapedectomy is indicated when the patient is suspected of having otosclerosis with a bone conduction level of 0 to 25 dB in the speech range and an air conduction loss of 45 to 65 dB. The air-bone gap should be at least 15 dB. If the air-bone gap is less than 20 dB, the disease may be early and actively growing, and the patient’s hearing may not be significantly impaired.

Patients with hearing losses in the 90 to 100 dB range may be suitable for stapedectomy because this surgery may enable them to use a hearing aid. Far advanced otosclerosis (FAO) is defined as no measurable air or bone conduction, or air conduction no better than 95 dB and bone conduction at 55 to 60 dB at one frequency only (Lippy 1994). In a retrospective study, Shea et al (1999) described their results with stapedectomy in 78 ears with FAO. Their follow-up ranged over a period from 1 to 21 years, with a mean follow-up of 5 years. All patients had air conduction (AC) and bone conduction (BC) tested. Rinne’s test was performed with a 256 Hz magnesium tuning fork. The pure tone average for AC and BC was computed for 500, 1000, and 2000 Hz. Hearing improvement was defined as air-bone gap closure to 10 dB or less and/or AC improvement of 20 dB or more, with no decline in speech discrimination scores greater than 10%. In their results, Shea et al reported that hearing improvement was achieved in 52 of 78 ears (66.7%). In group 1, AC was greater than 90 dB, BC was greater than 60 dB, and hearing improved in 26 of 32 ears (81.2%).

Lippy et al (1998) examined word recognition scores (WRSs) following stapedectomy for FAO. The WRS changes were examined to determine whether they were consistent with acclimatization or recovery from auditory deprivation changes that have been seen after the restoration of sound by amplification. A total of 24 patients who were suffering from FAO were analyzed retrospectively. One month following surgery, the mean WRS had improved 16.5%. The WRS continued to improve an additional 12% or more for 17 of 24 patients (71%) within 2 years after their initial postoperative hearing test. The mean WRS improvement within 2 years of the initial postoperative test was 16.2%. The authors arrived at the conclusion that initial WRS changes were attributed to hearing thresholds no longer remaining at or staying beyond audiometric limits. Additional WRS changes were consistent with reports of acclimatization or recovery from audiometric deprivation that have been seen after hearing aid use.

In their series of patients with FAO, Khalifa et al (1998) also concluded that cochlear implantation is not the best treatment for all profoundly deaf patients because some are better off with stapedectomy.

Initially, stapedectomy was thought to be an unsuitable procedure to be performed on children. Its effectiveness in children previously received less scrutiny in the literature. However, there has been a gathering body of evidence that includes children as candidates for stapedectomy (House et al 1980; Namyslowski et al 2001; Szymanski et al 2001).

De la Cruz et al (1999) reported on 95 ears of 81 patients younger than 18 years of age who had undergone stapedectomy from 1980 to 1994. There were 83 primary stapedectomies and 12 revision stapedectomies. Two groups were identified: congenital stapedial fixation and juvenile otosclerosis. Patients with congenital stapes fixation had an earlier onset of hearing loss (3 vs 10 ears, p <.001), a greater incidence of abnormalities of the malleus and incus (25% vs 3%, p <.001), and a slighter greater preoperative air-bone gap (35.2 ± 12.9 vs 27.8 ± 8.9, p <.001). Overall, 79% of primary cases and 89% of revision cases had an improvement in hearing, with mean postoperative air-bone gaps of 15 and 22 dB, respectively. The gap did not widen significantly during the entire length of follow-up (mean 72 months). In primary cases, 59.1% obtained a postoperative air-bone gap of 10 dB or less. Eighty-two percent of children operated on for otosclerosis obtained excellent results (postoperative air-bone gap ≤ 10 dB), compared with only 44% of children with congenital stapedial fixation (p =.02). In revision surgery, 29% of children obtained excellent results. Poorer results in both cases of congenital stapedial fixation and revision stapedectomy appear to be related to the greater incidence of associated anomalies of the malleus and incus.

Millman et al (1996) acknowledged that although good results of stapedectomy in children are rewarding in themselves, the possible complications that may occur are devastating. In their study, 31 patients 21 years of age or younger underwent stapedectomy at their institute. The average age at surgery was 16 years. Millman et al collected clinical and audiological data over a mean follow-up period of 25 years. They reported that there was no statistically significant difference in the air-bone gap when comparing the immediate postoperative gap (measured 2 months after stapedectomy) with the last recorded (mean 25 years after stapedectomy) audiogram. Fifty percent of the ears operated on maintained an air-bone gap within 10 dB at the last follow-up, and an additional 40% maintained a 10 to 20 dB gap. The authors concluded that stapedectomy was an effective method for closing the air-bone gap in children and that the long-term results equal those that can be achieved in adults. Their review represents the largest population with the longest follow-up in children who underwent stapedectomy for otosclerosis.

The main fear of stapedectomy in children was that their sport and athletic activities would be limited following this procedure. In other words, it was feared that the normal rough and tumble of childhood, middle ear infections, and middle ear effusions would adversely affect the results of stapedectomy. These studies show, however, that if children keep to reasonable activity without major head trauma, then stapedectomy is a safe and effective procedure. Of course, it is well to caution the children and their caregivers away from certain sports like boxing, football, and wrestling, where head trauma is an inherent risk. All respiratory tract infections need to be treated promptly, especially in those children who have undergone stapedectomy.

STAPEDECTOMY IN THE ELDERLY

The role of stapedectomy in the elderly has been debated. Arguments against stapedectomy have cited an increased risk of sensorineural hearing loss and vestibular problems, inferring that an aging cochlea is more susceptible to surgical trauma (Awengen 1993). Other studies (Mann et al 1996; Vartiainen 1995) refuted these arguments with findings that demonstrate that both hearing results and complication rates show no significant difference between the elderly and younger age groups.

Lippy and colleagues (Lippy et al 1996) reviewed the effectiveness of stapedectomy in those patients who were 70 years and older. A total of 154 patients were studied, including 11 patients with profound hearing loss with long-standing otosclerosis. Ages of the patients ranged from 70 to 92 years. Lippy et al reported that stapedectomy in the elderly gave a 90.9% success rate, which they found was comparable to the rate for a younger age group of patients who had undergone stapedectomy. Albera et al (2001) also concluded that stapedectomy was a safe and rewarding procedure that can be effectively performed in the elderly. Stapedectomy serves not only to reduce a handicap but also to improve the quality of life in the elderly. Furthermore, those who are profoundly deaf can benefit from amplification following stapedectomy.

STAPEDECTOMY IN COMBAT PILOTS AND IN DIVERS

Katzav et al (1996) reported on nine stapedectomies using the Robinson vein graft technique that had been performed on six high-performance pilots diagnosed to be suffering from otosclerosis. All of them returned to full active duty following stapedectomy without any vestibular symptoms. Katzav et al concluded that it can be safe for fighter or test pilots to return to full flight status following stapedectomy. They also found that full flight status can be reinstated as soon as 3 months after stapedectomy without endangering flight safety.

House et al (2001) in their study sought to determine the prevalence of adverse auditory and/or vestibular sequelae in patients following stapedectomy. The authors mailed survey questionnaires to 2222 patients who had undergone stapedectomy at a single tertiary otologic referral center between 1987 and 1998. Of the initial 917 respondents, 208 (22.7%) had snorkeled, scuba-dived, or sky-dived following stapedectomy. One hundred forty of these patients responded to a second questionnaire detailing dive protocols, otologic symptoms, and their relationship to their diving activities. Of these 140 patients, 28 of them had scuba-dived or sky-dived. Four of the 22 scuba divers (18.1%) experienced otologic symptoms at the time of diving. These included otalgia on descent (3 of 22, 13.6%), tinnitus (1 of 22, 4.5%), and transient vertigo on initial submersion (1 of 22, 4.5%). One patient developed sudden sensorineural hearing loss and vertigo 3 months after scuba diving, which he related to noise exposure. This patient was subsequently found to have a perilymphatic fistula, which was repaired, and hearing was restored. Nine patients who sky-dived (22.2%) reported otologic symptoms during the dive. No significant diving-related long-term effects indicative of labyrinthine injury were seen in any of the 28 patients. The authors concluded that stapedectomy does not appear to increase the risk of inner ear barotrauma in scuba and skydivers. They reported that these activities may be pursued with relative safety following stapes surgery, provided adequate eustachian tube function has been established.

All authors are in unanimous agreement that stapedectomy on the patient’s only hearing ear is not recommended.

Contraindications to stapedectomy include the following:

1. Active middle ear or external ear infections. Once these conditions are treated and have resolved completely and satisfactorily, however, a stapedectomy can be performed after a suitable interval of time.

2. When the otosclerotic patient presents with symptoms of hydrops and has vertigo and tinnitus. These conditions should be completely controlled. Only when the patient is symptom free for a minimum period of 6 months can the patient be considered a suitable candidate for stapedectomy.

3. Stapedectomy is contraindicated in middle ear atelectasis, especially if the atelectasis is severe.

4. General medical diseases that cause the patient to be unfit to undergo surgery.

6. Surgery is contraindicated during pregnancy. Once pregnancy is over, a stapedectomy can be performed after a suitable interval of time.

7. Surgery is contraindicated in those whose professional activities put them at risk. Patients such as boxers, professional wrestlers, and those who indulge in severe physical strain should avoid having a stapedectomy done until they have given up such activities.

Patients should be given detailed instructions that should be followed in the postoperative period. They should be advised against lifting heavy weights, to cough or sneeze without straining, and to avoid instrumenting the ear. Patients should be instructed to be alert and to report immediately any symptoms that might herald complications, such as vertigo, tinnitus, and hearing loss.

A good operating microscope is an absolute necessity for the surgery (Fig. 10–4). The surgeon should start off at a low magnification and change to a higher magnification, especially when working on the footplate. 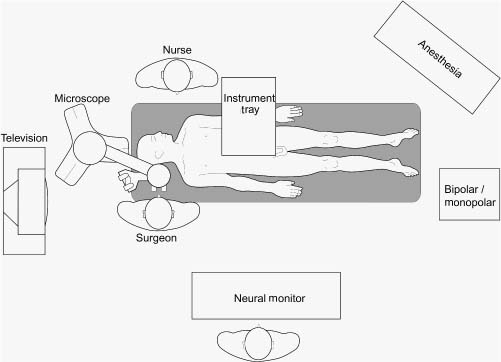 Figure 10–1 Standard setup of an operating room for ear surgery.

General anesthesia avoids the situation of a struggling patient. The surgical steps can be gone through smoothly. The surgeon, however, is unable to check on the immediate impact of the surgery. The disadvantage of this situation is that if the prosthesis is too long and the patient experiences vertigo, then the surgeon may need to take the patient back into surgery to replace the prosthesis.

A local anesthetic (1 to 10,000 epinephrine solution in 2% xylocaine) is used to anesthetize the outer ear. The incision (Fig. 10–6) starts off at 6 o’clock, then curves back straight for about 1 cm away from the annulus. Another incision is made at 12 o’clock and should go straight back for about 1 cm. The two incisions should then join one another.

Exposure of the Tympanic Cavity

The tympanomeatal flap is elevated, with care being taken not to tear the flap. The flap is elevated to the annulus from the 6 o’clock position to the 12 o’clock position (Fig. 10–7). Before elevating the annulus, meticulous hemostasis should be achieved. Should bleeding occur, it will obscure the surgeon’s visibility of the crowded and delicate local anatomy. The annulus is then subluxated from its groove, and the middle ear cavity is entered (Fig. 10–8). 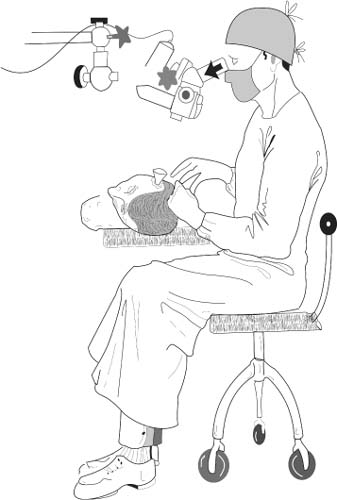 Figure 10–2 Use of the speculum holder. (From Schuknecht HF. Stapedectomy . Boston: Little, Brown; 1971. Used with permission.)

The next steps are as follows: