Left eye fundus photograph showing multifocal serpiginoid lesions of presumed tubercular uveitis, involving the posterior pole as well as the periphery. The lesions are noncontiguous to the optic disc and showing centrifugal spread

Clinical differentiation between autoimmune SC and tubercular MSC is mandatory so as to initiate appropriate therapy in time [12]. While SC shows a large, solitary juxtapapillary lesion with minimal or no vitritis, tubercular MFC frequently shows multifocal, confluent lesions (that are noncontiguous to optic disc) in the posterior pole as well as the periphery, with vitreous cells. While SC tends to affect elderly patients, tubercular MSC affects younger, middle-aged group [10]. Anterior segment inflammation is rare in both.
Other non-tubercular infectious causes (virus, syphilis, and toxoplasma) are also associated with signs of active inflammation in the aqueous or vitreous. Viral SC has shown multifocal lesions, predominantly affecting the macula, along with cellular reaction in the aqueous as well as vitreous [22, 42, 43]. In Toxoplasma gondii-associated SC, multifocal, confluent lesions have been described in the posterior pole as well as the periphery [44]. Francisella tularensis has been associated with unilateral multifocal subretinal lesions, sparing the peripapillary area, with normal anterior chamber [48]. Bartonella henselae has been reported to cause unilateral, macular subretinal lesions without anterior segment involvement [48].
Presence of other signs of uveitis is rare, such as retinal vasculitis in the same [10] or fellow eye [50] of MSC patient, anterior segment inflammation in SC [52] or MSC [10], disc edema, or cystoid macular edema in MSC [10].

As SC or MSC is essentially diagnosed clinically, fundus imaging is mandatory at baseline and subsequent visits to document the extent of involvement and monitor the response to therapy. Digital fundus photography should record all outcome measures including healing, progression, or recurrence of lesions. Fundus fluorescein angiography (FA) shows initial hypofluorescence (white arrows) and late hyperfluorescence (red arrows) of active lesions that appear as patches with ill-defined borders (Fig. 17.2a, b). Healed lesions appear well demarcated and show transmission defect, indicating RPE destruction [53, 54]. Staining of the sharp borders is usually seen in late phases. On indocyanine green angiography (ICGA), the active lesions appear hypofluorescent in early as well as intermediate phases [53, 55]. In the late phase, they either remain hypofluorescent or become isofluorescent. Additionally, ICG may identify active lesions that have just evolved and are limited to choriocapillaris, not yet extending to RPE. These lesions are subclinical and not detected on fundus examination and FA [56, 57].

(a, b) Fundus fluorescein angiography of the same eye as in Fig. 17.1, showing hypofluorescence (white arrows) of the active lesions in the early phase (a) and hyperfluorescence (red arrows) in the late phase (b)
As compared to conventional imaging techniques (FA and ICGA), fundus autofluorescence has emerged as a novel, noninvasive imaging tool for SC or MFC. It reflects the viability of RPE cells by capturing the fluorescent properties of lipofuscin. The alterations in autofluorescence are influenced by antiinflammatory treatment [58]. It has the added advantages of being easy, quick, and reliable for detecting even subtle lesions that seem inactive on clinical examination [38]. Typically, four stages have been described in tubercular MSC when new lesions erupt until they heal completely [38]. In stage I (acute), the active lesion demonstrates an ill-defined halo characterized by hyperautofluorescence that appears diffuse and amorphous (Fig. 17.3a). Once the lesion begins to heal in stage II (subacute), its border acquires a thin hypoautofluorescent rim that delineates the lesion. There is an increase in central hyperautofluorescence (Fig. 17.3b). As the lesion heals further in stage III (nearly resolved), it appears stippled due to increasing hypoautofluorescence and decreasing hyperautofluorescence (Fig. 17.3c). On complete healing that takes several months, the entire lesion shows hypoautofluorescence (stage IV, completely resolved) that deepens further with pigment accumulation over the scar with time (Fig. 17.3d).

(a–d) Fundus photograph (left panel) and autofluorescence (right panel) of the same eye (as in Fig. 17.1) in the acute phase showing a central hyperautofluorescence surrounded by a faint hyperautofluorescent halo corresponding to the active lesion (a). As the lesion starts healing after initiating corticosteroids and antitubercular therapy, the lesion acquires a thin rim of hypoautofluorescent border, and the central hyperautofluorescence becomes more prominent (b). With further healing, the hyperautofluorescence starts diminishing and hypoautofluorescence increases, giving rise to a stippled appearance on autofluorescence (c). As the lesion heals completely, it becomes completely hypoautofluorescent (d)
The spectral-domain optical coherence tomography (SD-OCT) provides an insight into the details of retinal layers and is a useful tool in monitoring the outer retinal changes during the course of choroiditis [59]. The abnormal autofluorescence findings correlate with changes seen on high-resolution SD-OCT [49]. The involvement of outer retinal layers (RPE, photoreceptors, external limiting membrane, and outer nuclear layer) is evident on OCT as seen by hyperreflectivity in acute stage and atrophy in healed stage, suggesting a primary inflammation of the outer retina rather than the choroid in tubercular MSC [49]. A full-thickness retinal inflammation as seen by inner retinal hyperreflectivity has been shown in a combined en face OCT of active multifocal choroiditis lesions, while the inner retinal layers appeared normal in SC [60]. The OCT is also valuable in detecting and monitoring other associated findings such as cystoid macular edema, choroidal neovascular membrane, macular scar, epiretinal membrane, subretinal fluid, etc.

A typical clinical presentation is sufficient for diagnosing SC. However, the presence of atypical features provides an indication for eliciting history of living in TB-endemic areas or prior contact with TB and conducting certain laboratory tests to rule out conditions mimicking SC [12]. In TB-endemic areas, tuberculin skin test, chest X-ray, and treponema hemagglutination test are usually ordered at baseline [35, 36]. QuantiFERON-TB Gold (Cellestis Carnegie Victoria, Australia) test has strengthened the association of TB with SC [37]. Although majority of patients with presumed tubercular MSC have normal chest X-ray and do not have any evidence of systemic focus elsewhere [10, 12], chest X-ray is a routine test ordered in uveitis practice. CT scan of the chest or PET scans may be indicated in some patients with suspected systemic sarcoidosis or tubercular involvement.
Invasive test like PCR has helped to prove infectious etiology in SC, such as TB [9, 61], virus [42, 43], or toxoplasmosis [44]. The aqueous or vitreous fluid may be subjected to PCR, depending upon the severity of inflammation. Histopathological findings in SC have been reported rarely [41, 62]. But there are no clinicopathological reports on infectious SC.

Multiple recurrences and relentless progression of SC usually lead to poor visual outcome due to macular involvement. The most common complication is choroidal neovascular (CNV) membrane, possibly due to ischemic injury to the choroid and RPE following their inflammation, which causes severe visual loss. It has been reported to occur in about 13–35 % of SC patients [24, 62–66]. It may present along with active lesions or healed scars. Tubercular MSC has also been reported to develop CNV as a rare complication [10]. CME is rare in SC [67] as well as MSC [10]. Subretinal fibrosis has been reported in both SC [63] as well as tubercular MSC [10] over long-term follow-ups. Retinal vascular occlusions and secondary neovascularization may also occur in SC, unlike MSC [65, 68, 69]. Healed lesions in tubercular MSC may show extensive RPE atrophy or hyperpigmentation over long term [10] (Fig. 17.4). 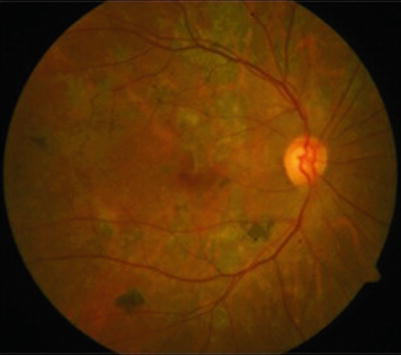 Fellow right eye of the same patient as in Figs. 17.1, 17.2, and 17.3, with old healed multifocal serpiginoid choroiditis showing marked atrophy of retinal pigment epithelium in the areas of healed choroiditis lesions and hyperpigmentation in other scars

Systemic corticosteroids remain the mainstay of therapy for SC. Intravenous or high-dose oral prednisolone should be administered as a prompt initial therapy to control active choroiditis [24, 63, 70, 71]. Once the initial acute episode of inflammation is limited by corticosteroids, immunosuppressive agents are required to control exacerbations and recurrences over long term and also to avoid side effects of corticosteroids [24, 72–75]. The ultimate goal is to preserve vision by preventing recurrent progressive inflammation. However, the optimal duration and choice of immunosuppressive agent is not clear. In patients with contraindication for systemic corticosteroids, intravitreal triamcinolone has been successfully used in SC [76, 77].
Patients with tubercular MSC respond favorably to oral corticosteroids when given along with antitubercular therapy (ATT) [9, 10]. The rate of recurrence of inflammation is significantly minimized following four-drug conventional ATT. It should be administered under a physician’s supervision to look for any drug toxicities. Care should be taken while monitoring these patients, especially in initial few weeks, for any possible paradoxical worsening of lesions that may occur secondary to ATT [78–81]. These usually respond to corticosteroids in same or increased dosage. Occasionally, an immunosuppressive agent may be indicated for uncontrolled progression or lesions threatening the fovea [78].
Development of complications such as CNV may be prevented or delayed by an early, prompt antiinflammatory therapy. Intravitreal injections of ranibizumab and bevacizumab, pharmacologic inhibitors of vascular endothelial growth factor (VEGF), have shown favorable results in terms of visual outcome and regression of CNV secondary to ocular inflammation [82–84]. Acetazolamide has been used to treat CME occurring in SC [67].