Active primary retinal T. gondii lesion on the outside border of the vascular arcades in a 28-year-old female patient proven by intraocular fluid analysis. There is a mild vitreous inflammation. Note the associated small hemorrhage and vasculitis 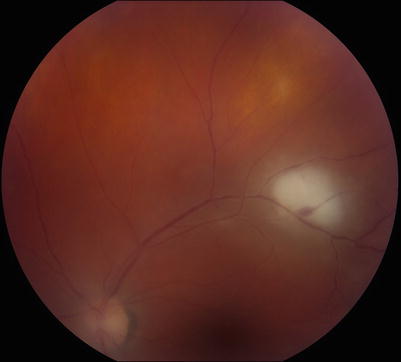 The same lesion 6 months after the onset of symptoms. The borders of the lesion are fully pigmented and there is no vitreous inflammation. This patient had received antiparasitic treatment

(a) Multiple retinal scars and an active retinal lesion in the left eye in a solid-organ transplant patient under systemic immunosuppressive medication. (b) The lesion reacted well to systemic antiparasitic treatment

The presumed diagnosis of OT is commonly based on the typical clinical findings. The diagnosis of active OT can be proven by anterior chamber fluid analysis, especially with Goldmann-Witmer antibody coefficient, which yields a sensitivity of 80–90 % in both immunocompetent and immunocompromised hosts, and additionally, the time of aqueous sampling being of less importance in GWC than the early stages required for the PCR analysis [47–49]. Aqueous analysis for T. gondii PCR is of less value as the sensitivity is approximately 10 % in the immunocompetent host and approximately 40 % in the immunocompromised host [48, 49].
Serological testing for T. gondii is only supportive because of the high seroprevalence in many countries, but might be of clinical importance in children and in countries with low prevalence of toxoplasmosis [1]. Elevated IgM levels are not necessarily an indication of a recently acquired infection as IgM can remain positive for longer than 1 year after the onset of infection [50]. However, IgM presence in a pregnant woman is considered a sign of a recent infection, and the subsequent measurement of the IgG avidity as well as the rising IgG titers in the absence of therapy can be used to prove or rule out a recent infection [1]. The positive serological results during the pregnancy indicate that the infection already took place and the effective treatment probably might start too late [51]. When the local laboratory has limited diagnostic possibilities, the samples should be sent to the reference laboratories [1]. The evidence of a recent infection during pregnancy requires referral to a gynecologist (amniotic PCR and antiparasitic medication may be considered).

The recently used treatment modalities are summarized in Table 1.1. Active episodes of OT in the immunocompetent host follow a self-limiting course. So far, curative treatment for OT is not available, and the main purpose of treatment is to stop the parasite multiplication during the active inflammation stage. There is little convincing evidence that systemic antiparasitic medication has a beneficial influence on the visual outcome of OT, the duration of an active episode, and future recurrence rate in the immunocompetent host. In the past, smaller retinal scars were reported after the treatment with the combination of pyrimethamine, sulfadiazine, and corticosteroids when compared to scars in cases with no therapy [52]. The duration of inflammatory activity was similar in treated and not treated patients [52]. Adverse reactions with the combination of pyrimethamine and sulfadiazine are common and include bone marrow suppression (thrombocytopenia and leukopenia), which frequently leads to cessation of the therapy [52]. In addition, sulfonamides are a cause of frequent allergies such as skin rash and fever [52]. In a randomized prospective study of Bosch-Driessen et al., the combination of pyrimethamine and sulfadiazine was compared to pyrimethamine and azithromycin [53]. The treatment outcomes were similar for both groups, but the combination of pyrimethamine and azithromycin was however associated with less severe events and might be preferable in the treatment of vision threatening OT [53]. Also no difference in reduction of inflammatory retinal lesion size was noted in a recent prospective trial found in which the triple therapy containing pyrimethamine and sulfadiazine was compared to trimethoprim/sulfamethoxazole [54].


aShould be combined with folinic acid supplement
bIn persons under 70 kg, first day 50 mg, followed by 25 mg per day is recommended
Short-term treatment of an episode of active OT has little effect on the recurrence rate [6]. In animal studies, the administration of atovaquone reduced the number of cerebral Toxoplasma cysts [55]. In addition, Winterhalter et al. suggested that atovaquone might prolong the time interval to recurrence; however, control group to substantiate this hypothesis was not included [56].
Since the active OT attacks are self-limiting and adverse drug reactions are common, not all cases require treatment [57]. In cases with threatened visual acuity by active retinal lesions located in the macular region or adjacent to the optic disk, a combination of systemic antiparasitic drugs and prednisone is commonly initiated (triple or quadruple therapy). Triple therapy consists of a combination of two different antiparasitic medications and systemic prednisone administration. In the quadruple therapy, a third antiparasitic drug is added. Prednisone should preferably be started 24–48 h after the start of antiparasitic medication. In cases manifesting with peripheral active lesions together with a severe vitreous inflammation, the treatment is usually also given to shorten the duration of the vitreous inflammation. In the case of congenital OT, the recommended treatment regimen includes a combination of pyrimethamine 1 mg/kg/day for 6 months followed by 1 mg/1 kg three times a week, with sulfadiazine 100 mg/kg/day for 12 months and folinic acid for 12 months [58]. When there is an allergy for sulfadiazine, clindamycin may be used as an alternative [59].
Systemic corticosteroids should always be given under a shield of antiparasitic medication. Multiple observations of severe OT were reported in patients using systemic corticosteroids without antiparasitic medication as well as after periocular or intravitreal corticosteroid injections [6, 60–63].
During pregnancy, the various treatment options for OT are limited. In cases with threatened visual acuity, clindamycin and azithromycin are the safest options. The US Food and Drug Administration (FDA) has categorized both clindamycin and azithromycin in group B, which means that animal studies have failed to reveal evidence of teratogenicity. Both drugs have also been used in multiple studies for, respectively, bacterial vaginosis and chlamydia infection during pregnancy without adverse effects for the fetus, but the dosage and duration of treatment in these studies were different from that used for OT [64–67].
In the last decade, increasing interest has arisen in the intravitreal administration of clindamycin (1.0–1.5 mg/0.1 ml) with or without dexamethasone (400 μg/0.1 ml). The reported efficacy of intravitreal treatment with clindamycin and dexamethasone was similar to the classic triple systemic regimen with pyrimethamine, sulfadiazine, and prednisone [68–71]. An advantage of this local therapy regimen is obviously a lack of systemic side effects such as bone marrow suppression. In most studies, one or more injections were needed with a varying interval of 1–4 weeks between injections [68–71]. Further, intravitreal therapy may be a safer alternative for a recurrence of OT during pregnancy compared to the various systemic medications. Intravitreal therapy might also be convenient in situations where the oral treatment is not available or not possible.

Preventive treatment in immunocompetent patients is commonly given in patients with threatened visual acuity located in the only seeing eye. In 2002, Silveira et al. reported on a prospective randomized open-label trial which showed that long-term use of trimethoprim 160 mg/sulfamethoxazole 800 mg every three days reduced the risk for a recurrence from 24 to 7 % during up to 20 months of follow-up; however, the recurrence rate after cessation of therapy remains unknown [73]. So far, the preventive treatment is individually designed and there are no widely accepted guidelines that would indicate the choice of the drug and the duration of such a treatment. The development of resistant strains during the prolonged treatment remains also a theoretical possibility.
There is a lack of studies which would show what are the best prophylactic options in the immunocompromised hosts; “the Centers for Disease Control and Prevention” (CDC) guidelines for the prevention of toxoplasmic encephalitis in AIDS recommend trimethoprim 160 mg/sulfamethoxazole 800 mg daily for patients with a CD4+ count <100 cells/μL [74]. Also in the case of immunosuppression in solid-organ transplantation patients, trimethoprim 160 mg/sulfamethoxazole 800 mg three times a week is effective as Toxoplasma prophylaxis [75, 76].
Prevention of systemic Toxoplasma infection is especially important for not yet infected pregnant women. Avoidance of eating raw or undercooked meat as well as washing everything with hot soapy water that comes in contact with raw meat such as hands, cutting boards, and knives and gardening with protective gloves has been recommended [2, 77]. Cooking of meat is important as tissue cysts cannot survive when heated up to 67 or 60 °C for 10 min, also freezing meat below −10 °C for at least three days is usually effective in destroying the viability of the cysts, but cooking time and freezing time are both dependent on the thickness of the meat [1, 78, 79]. Microwave cooking is probably less effective in inactivation of the tissue cyst as a consequence of uneven heating [79]. Washing or peeling of all vegetables and fruits before eating is also of importance as well as feeding housecats dry or cooked food. Frequent cleaning of the cat litter box preferably by a nonpregnant person and preferably with gloves on might also decrease the infection rate, as it takes several days for the oocysts to become infectious [77]. Covering sandboxes and avoidance of drinking unfiltered contaminated water might also be of value [9, 11, 80].

T. gondii is a common cause of infectious posterior uveitis worldwide. Routes of primary infection include congenital and postnatal transmissions, and both types of infection may cause OT. Ocular involvement occurs typically in the chronic phase of the disease and might not be present during the acute stage of infection. Curative treatment is so far not available, and there is a little evidence that a short-term systemic therapy alters the natural long-term course of the disease. The prevalence of recurrences has a tendency to occur in clusters and might be decreased during long-term antiparasitic treatment, but the adverse effects and efficacy of the preventive regimens are not clear. Immunosuppressed patients might present with atypical features and require prolonged treatment. Active OT episodes in the immunocompromised persons should preferably be proven by intraocular fluid analysis and always be treated. Intravitreal clindamycin application might become a useful alternative instead of systemic treatment of OT in the immunocompetent hosts, especially those with intolerance of systemic treatment regimens and pregnant women. Further research on the genotype of T. gondii might link the different strains of T. gondii to various clinical characteristics of OT (Table 1.2).