Computed tomography (CT) scanning has replaced multidirectional tomography in general and in the diagnosis of otosclerosis in particular. Because most of the changes that occur are subtle, however, even CT scanning at this time may miss such findings. Magnetic resonance imaging (MRI) has had a limited role as yet in the imaging of otosclerosis. CT study should be performed with a modern apparatus using an extended gray scale up to 4000 Hounsfield units, small collimation, and a pixel size no more than 0.25 mm.

Fenestral otosclerosis is a clinical diagnosis made on the basis of patient history, family history, otoscopy, tuning fork tests, and audiometry. A CT scan can visualize the extent of the pathology of the oval window (Fig. 5–1); it is best used, however, in situations where patients present with mixed deafness or with cochlear otosclerosis.

In active otosclerosis, the poorly calcified foci may not be recognizable. The margin of the oval window becomes decalcified, so that the oval window seems larger than normal. In an inactive focus, the oval window may become narrowed, and in advanced cases it may be obliterated. Occasionally CT studies can be used to confirm a clinical diagnosis, and in those patients with bilateral disease, CT scanning can help select the ear to be operated upon.

CT scanning is useful in evaluating patients postoperatively in situations where a hearing loss following an initial improvement has occurred. This is applicable to metallic prostheses (Fig. 5–2), because CT scans demonstrate if the prosthesis is in place or not. It should be remembered that because of volume averaging artifacts, the prosthesis may not be seen, or it may appear thicker than it actually is. Ultimately, the best way to check if the prosthesis is in place or not is by reexploring the middle ear. 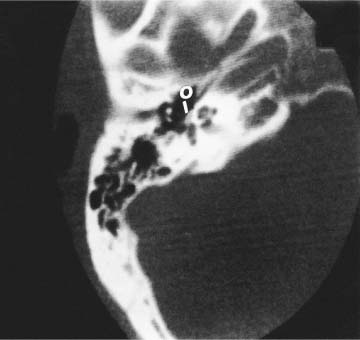 The normal otic capsule appears as a sharply defined homogeneously dense bony shell outlining the cochlea. Otosclerotic foci arise from the endochondral layer of the otic capsule and may be single or multiple. Large or multiple foci that merge with one another cause extensive demineralization. A typical sign of cochlear otosclerosis is the formation of a double ring effect due to multiple interconnected foci within the otic capsule. Active foci appear as areas of demineralization, and inactive foci appear as areas of denser bone (Fig. 5–3). Therefore, CT scanning is useful in diagnosing cochlear oto-sclerosis only when the focus is in the active phase. In the sclerotic (inactive) phase, CT scanning may not be useful (Chole and McKenna 2001; Thiers et al 1999). Even large otosclerotic lesions may go undetected. CT scanning does have an important benefit: if a large patent cochlear aqueduct is present, a scan can alert the surgeon to the presence of a potential perilymph gusher (Swartz and Harnsberger 1992; Valvassori 1977). It can help alert the surgeon to the presence of other abnormalities or variations of normal anatomy such as a dehiscent jugular bulb. 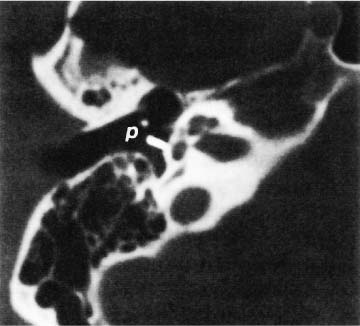 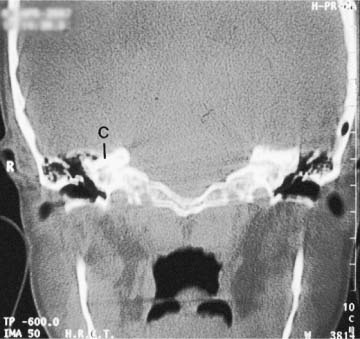 CT scanning helps rule out other common causes of sensorineural hearing loss as well. When the otosclerotic focus involves the otic capsule, the density and outline of the cochlea are altered. At present, however, CT scanning is the only method to exclude or confirm the diagnostic suspicion of pure cochlear otosclerosis or far advanced otosclerosis. The reported (Mafee, Henrikson, et al 1985; Miura et al 1996; Swartz et al 1984) sensitivity of CT scan aiding a diagnosis of pure otosclerosis or far advanced otosclerosis ranges from 34 to 90%. More recent studies (Mafee, Valvassori, et al 1985), however, have claimed a higher percentage of detection of fenestral otosclerosis.

Valvasorri (1966, 1993) found that three factors must be considered when imaging cochlear otosclerosis on CT scanning. For the otosclerotic focus to be detected,

1. The focus must be greater than 1 mm in diameter; otherwise it will not be detected.

2. The density of the focus must differ from the rest of the otic capsule. That is why active (areas of demineralization) foci are easier to detect than inactive (sclerotic) foci.

3. The normal labyrinthine otic capsule is very dense. Sclerotic foci can be detected only when they are close to the periosteal or endosteal surfaces of the otic capsule.

The radiographic appearance of the otosclerotic lesion varies with the stage of maturation of the disease. Typical of cochlear otosclerosis is the formation of a double ring effect due to multiple foci merging with each other in the cochlea. When active and inactive foci appear together, a mosaic picture characterized by areas of decreased density with areas of increased density is seen. Finally, CT scanning must be correlated with clinical and audiological data to make a correct diagnosis. Further improvements in CT scanning, including better collimation and decreased pixel size, will produce images of higher definition.

THE ROLE OF CT SCANNING IN FAMILIAL VERSUS SPORADIC OTOSCLEROSIS

In their retrospective study of 211 patients, Shin et al (2001) reported that in familial (hereditary) otosclerosis, radiologic signs are always present and may precede clinical expression of the disease. It was less sensitive, however, for those who were suffering from otosclerosis without any family history (sporadic otosclerosis) of otosclerosis. A family history of oto-sclerosis was found in 24.2% of their patients. The radiologic findings differed between patients with a sporadic form of the disease and patients who had a familial form of the disease. In the familial form, the lesions were more often detectable, bilateral, and severe. Their findings led to the assumption that fenestral otosclerosis occurs more in the sporadic form, whereas more extensive lesions on CT scanning seem to indicate the familial forms.

The real value of CT scanning lies in the treatment of far advanced oto-sclerosis when cochlear implantation is being actively considered. If the cochlear lumen is not clearly seen because of new bone formation, such patients are thought to be unsuitable candidates for cochlear implantation (Ruckenstein et al 2001).