A perilymph fistula is one of the most common causes of sensorineural hearing loss following stapedectomy. It is thought that perilymph fistulae occur because of inadequate closure of the fenestra in the footplate by the seal, too long a prosthesis, or possibly increased perilymph pressure. The diagnosis and treatment of this condition are vital, because it has the potential to cause irreversible profound sensorineural hearing loss and puts the patient at risk of developing meningitis. Newlands (1976) reported on a patient who developed acute otitis media, labyrinthitis, and meningitis 16 months following stapedectomy. Poststapedectomy carries an increased risk of labyrinthitis and meningitis. Should labyrinthitis occur with or without meningitis, fistula repair must be taken as soon as the infection has been eliminated (Matz et al 1968).

SIGNS AND SYMPTOMS OF PERILYMPH FISTULA

Stapedectomy by necessity involves the creation of a fistula for the insertion of the prosthesis. The primary perilymph fistula occurs when the fistula created at the time of surgery persists and fails to seal off the vestibule from the middle ear. This can occur immediately after surgery, and symptoms can persist for days or weeks.

Vertigo may result from semicircular canal disturbances that then result in rotatory vertigo, or it may have a utricular origin, which results in a sense of falling down. Harrison et al (1967) found that 35% of their patients complained of vertigo, and 39% had a sensation of imbalance. Moon (1970) found that 77% of primary fistulae and 61% of secondary fistulae caused disequilibrium.

The signs and symptoms vary with the size of the leak. Large fistulae result in rapid hearing loss, tinnitus, and vertigo. Morrison (1984) noted that such large fistulae accompanied technical difficulties by the operating surgeon at the time of stapedectomy. Fluctuation in hearing loss is unlikely to be a feature in such a situation. In early perilymph fistulae, when the leak is small, the hearing loss may initially appear as a conductive hearing loss; then has a sensorineural component; then progresses to a total sensorineural hearing loss. When such a fistula is repaired late, the hearing does not improve, although vertigo may resolve. When a minute fistula is present, the only evidence of the fistula is failure of a good closure of an air-bone gap, mild fluctuation in hearing, and a small decrease in speech discrimination scores. 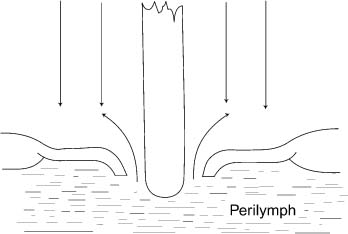 Cause of Primary Perilymph Fistula

Improperly sealed oval window fenestrae are the most likely cause of such fistulae (Fig. 12–1). Goodhill (1967) stated that if a mucosal seal does not hermetically seal off the vestibule from the middle ear at the time of surgery, then the chances of such a fistula forming are high. Failure to reflect the mucoperiosteal flaps may allow the lacerated edges of tissue to extend down into the vestibule and prevent formation of a new endosteal membrane at the level of the oval window. A prosthesis that is too long will also prevent the fistula from sealing off.