Obliterative otosclerosis involves total obscuration of the oval window and its margins (Fig. 11–1). It is thought to be evidence of very advanced otosclerosis. Young patients are especially at risk, particularly when active, aggressive otosclerosis develops around puberty. Obliteration of the round window is less common, and total obliteration is rare. When the round window is obliterated, however, the patient usually has an accompanying sensori-neural hearing loss.

Causse et al (1991) reported that obliterative otosclerosis is caused by the same immunoenzymatic process at work in cochlear otosclerosis. In the early stages of obliterative otosclerosis, thin osteoid lamellae are found in the deep part of the highly vascularized mucoperiosteum of the fissula ante fenestram. Once the disease advances, however, the stapes superstructure and its crura are eventually buried in the extension of otosclerotic bone that fills the oval window niche. Bone thickness in the obliterated oval window niche varies from 0.5 mm to more than 2.0 mm (Gristwood 1966).

Gristwood (1966) reported a 12.5% incidence of obliterated footplates in his series, noting that cases of obliterative otosclerosis were almost invariably diagnosed during adolescence and were associated with the presence of aggressive disease. He found it impossible to predict before surgery on the basis of audiometry and clinical findings that an obliterated footplate awaited the surgeon. Gristwood attributed the high incidence of obliterated foot-plates in his series to the low levels of sodium fluoride in drinking water. It is interesting to note that all authors agree that obliterated footplates are found in adolescents and young adults usually at puberty, between the ages of 12 and 15 years. Gristwood and Venables (1983) reported that they found no strong evidence that pregnancy increases the progression of obliterative otosclerosis. 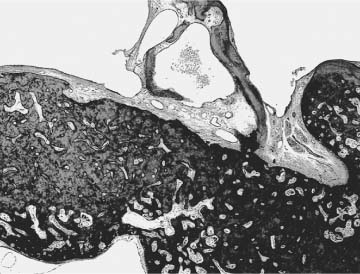 Figure 11–1 Photomicrograph of an obliterated foot-plate. 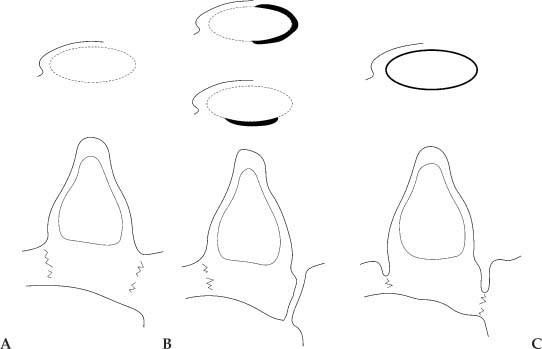 A partly obliterated footplate occurs in approximately 4.6% of cases. The footplate is diffusely thickened; however, a rim of delineation can be identified (the rim may not be completely identifiable in the entire dimension of the footplate) (Fig. 11–2B).

The incidence of a spuriously obliterated footplate (Fig. 11–2C) is approximately 0.5%. In this situation, a surrounding rim is seen in the presence of a solid, thick footplate. It only becomes clear that the delineation is false when the surgeon tries to remove the footplate and fails because the footplate is thicker than anticipated.

The biscuit, or “rice grain,” footplate is diffusely thickened, while retaining a clear, well-delineated rim and an intact annular ligament. The surgeon should operate with caution in these situations, for it is easy for this kind of footplate to become dislodged.

In a crowded oval window niche, the oval window is crowded by the oto-sclerotic focus. A slitlike opening is all that is seen. The footplate, however, may be relatively thinner than a truly obliterated footplate. The overhanging bone should be removed with care before addressing the footplate.