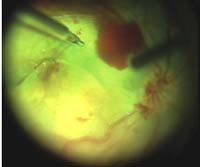 The intraocular application of dyes to assist visualization of preretinal tissues during vitreoretinal surgery, “chromovitrectomy,” has become a very popular technique in the past few years (1). Chromovitrectomy was motivated by the difficulty in visualizing the several thin and transparent tissues in the vitreoretinal interface (2, 3). Staining the internal limiting membrane (ILM), the epiretinal membrane (ERM), and the vitreous with a vital dye may assist the visualization of those fine transparent tissues, thereby leading to improvement in the postoperative visual acuity. The first vital dye used in chromovitrectomy, indocyanine green (ICG), facilitated the identification of the fine and transparent ILM (2). Following ICG, trypan blue (TB) has been introduced as an appropriate agent to identify the several ERMs, and triamcinolone acetonide (TA) has been found to stain the vitreous well. Recently, additional vital dyes such as infracyanine green (IfCG) and patent blue (PB) have been proposed for intraocular application during vitrectomy (4, 5). In this chapter the current knowledge involving the use of dyes in chromovitrectomy will be discussed. In order to minimize the risk of toxic effects of dyes in chromovitrectomy, surgical recommendations are presented.

The application of intravitreal ICG was first reported in cadaver eyes to improve the visualization of the ILM. Since then, many articles have been released regarding the use of ICG as a surgical adjuvant to facilitate the identification and removal of the ILM in macular surgery (Figs. 29-1 and Figs. 29-2). ICG-assisted macular hole surgery demonstrated closure rates above 75% as well as visual improvements varying from 18% to 94% (3). However, soon after the introduction of ICG for the treatment of macular holes, caution among vitreoretinal surgeons took over the previous enthusiasm, as Gandorfer et al. in 2001 (6) postulated that intravitreous ICG-assisted ILM-peeling promoted worse visual outcomes in macular surgery. Histopathological analysis of tissue harvested during ICG-assisted vitreomacular surgery revealed various retinal elements adherent to the ILM. On electron microscopy, these retinal structures on the inner surface of the ILM were identified mainly as the plasma membrane of Müller cells (7, 8). They are thought to originate from an altered cleavage plane induced by the ICG application. Most toxicity studies in animals have shown dose-dependent toxicity of ICG to various types of retinal cells. Interestingly, recent clinical reports have shown better surgical outcomes of ICG-guided chromovitrectomy, which may be explained by a more selective and controlled ICG application (9, 10). 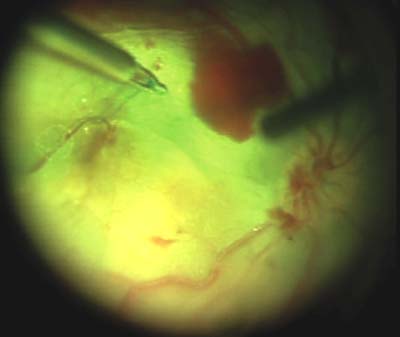 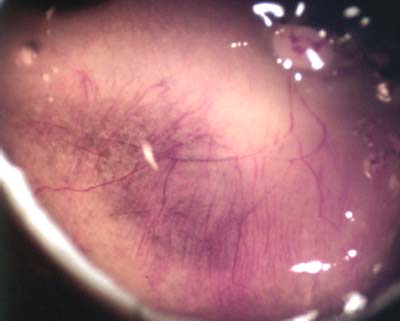 IfCG is the modified iodine-free version of ICG that does not contain 5% sodium iodide used for the lyophilized form necessary for dye-solubility. The dilution of IfCG in glucose 5% generates an iso-osmotic solution, thereby reducing the risks of hypo-osmotic-induced toxicity previously reported with ICG. Similar to ICG, IfCG has been demonstrated to avidly stain the ILM. In contrast to ICG, most animal studies demonstrated a safe profile of IfCG for chromovitrectomy. ILM-specimens excised after IfCG-staining have not shown any neural retinal disruption (11).

The anionic hydrophilic azo-dye TB has a molecular weight of 960 Daltons. The vital stain traverses cell membranes only in dead cells and therefore colors only dead tissues or cells blue. In the late 1990s, TB was shown to have a great affinity to the anterior capsule of the lens which facilitated capsulorrhexis in cataract surgery. Soon thereafter, TB was tried as a stain for preretinal tissues such as the ILM and ERM in chromovitrectomy (Fig. 29-3) (4). However, ILM staining with TB is more subtle than ICG stained ILM. If TB is used for ILM staining, the dye should be kept in contact with the ILM for a longer period of time than ICG. Consecutive clinical studies reveal that TB exerted only mild toxic effects on the retina, while some experimental data disclosed mild irreversible retinal damage after retinal exposure to TB. 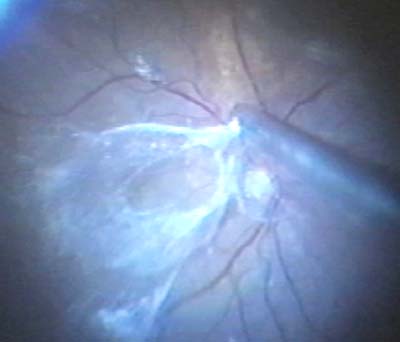