Diseases of the Retrochiasmal Visual Pathways

DISEASES OF THE RETROCHIASMAL VISUAL PATHWAYS

The majority of patients with retrochiasmal disease present with symptoms related to a homonymous hemianopia. However, not all patients are aware of the binocular nature of their defect. Patients who have incongruous (i.e., asymmetric) visual field loss often present with complaints of monocular visual loss. For this reason, patients with complaints of unexplained monocular visual loss should undergo visual field testing in both eyes to aid in localization of the underlying lesion.

A second group of patients with retrochiasmal disease presents with a variety of problems involving higher visual function, including hallucinations, visual distortions, visual neglect, and visuospatial disorientation. These patients may be misdiagnosed as malingerers or hysterics because they may not have demonstrable visual field defects or acuity loss. The key to correct diagnosis in these patients is a careful history designed to elicit symptoms of higher visual dysfunction, as well as an educated awareness of the syndromes that produce these symptoms.

DISORDERS OF THE OPTIC TRACT

The optic tract represents the first stage in the visual pathway in which visual information is segregated in a homonymous fashion. Optic tract lesions can result from inflammatory, infectious, neoplastic, or vascular disease.

There is normal visual acuity with any unilateral retrochiasmal lesion, unless the optic nerves or chiasm are involved (which is often the case with optic tract lesions).

Patients may be aware of a homonymous hemianopia (see later).

There may be involvement of parachiasmal structures, manifested by headache, hypothalamic dysfunction, and contralateral hemiparesis (due to injury to the cerebral peduncles).

Complete lesions of the optic tract produce a complete contralateral homonymous hemianopia. Because of the proximity of the optic tract, chiasm, and optic nerves, complex field defects are common, and may include some element of bitemporal loss, or monocular loss in the form of a central scotoma or a nerve fiber bundle defect in the ipsilateral eye.1 Incomplete optic tract lesions characteristically produce an incongruous, that is, asymmetric, homonymous hemianopia (Fig. 29–1). The asymmetry of the hemianopia is due to the retinotopic organization of ganglion cell axons within the optic tract. Axons from corresponding parts of the retinas are not contiguous within the optic tract. A compressive lesion, therefore, may affect some parts of the visual field in one eye while sparing axons from the corresponding portion of the visual field in the other eye. Incongruity of homonymous field defects is most prominent with anterior lesions near the junction of the optic tract and chiasm, and diminishes progressively with more posterior lesions.1,2 This has been attributed to the gradual alignment within the optic tract of crossed and uncrossed ganglion cell axons from corresponding retinal areas. Complete optic tract lesions, however, produce an incongruous homonymous hemianopia, due to the inclusion of the “monocular temporal crescent,” that is, the far temporal field, of the contralateral eye. This area of the visual field is monocularly represented in the contralateral optic tract, lateral geniculate, optic radiations, and occipital lobe.

An afferent pupil defect may be present because of the asymmetry of field loss in both complete and incomplete tract lesions.3

• Isolated lesions of the optic tract are most frequently produced by parasellar tumors. The most common tumors are pituitary adenomas and craniopharyngiomas.

• Gliomas of the optic tract may occur, primarily in patients with neurofibromatosis type I.

• Demyelinating disease is an infrequent cause of isolated optic tract lesions.

Neuroimaging, lumbar puncture, and testing for systemic disease may help in diagnosis.

Treatment depends on the nature of the lesion.

DISORDERS OF THE LATERAL GENICULATE NUCLEUS

Isolated lesions of the lateral geniculate nucleus are rare, but may be diagnosed by distinctive patterns of visual field loss. 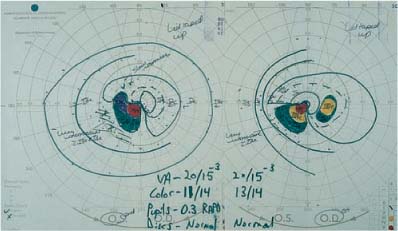 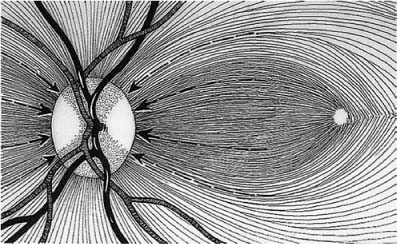 FIGURE 29–2 Atrophy of nasal fibers in a lesion of the optic tract producing “bow-tie” optic atrophy in the eye on the side opposite the lesion.

There is normal visual acuity with any unilateral retrochiasmal lesion, unless the optic nerves or chiasm are involved (which is often the case with optic tract lesions).

Patients may be aware of a homonymous hemianopia (see later).

Lesions affecting this structure may produce either congruous or incongruous visual field defects.5,6 Frisen and associates7,8 have described a pair of distinctive syndromes caused by vascular lesions involving the lateral geniculate nucleus (LGN), which has a dual blood supply derived from both the anterior and posterior circulations. The anterior and lateral portions of the LGN, including the hilus, receive their blood supply from branches of the anterior choroidal artery, a branch of the internal carotid. The remainder of the nucleus is supplied by branches of the lateral choroidal artery, which is derived from the posterior cerebral. The dorsal region of the LGN subserves macular vision, the lateral aspect subserves the superior visual field, and the medial aspect subserves the inferior field. Thrombosis of the lateral choroidal artery produces a homonymous, and fairly congruous, wedge-shaped defect (Fig. 29–3).7 Thrombosis of the anterior choroidal artery produces a homonymous defect that is complementary to that produced by lateral choroidal infarction, i.e., sparing of a wedge-shaped area in both the superior and inferior field (Fig. 29–4).8,9 Case reports suggest that this configuration of field loss may not be specific to LGN lesions and may be produced by lesions of the optic radiations10 or the occipital lobe.11

Because afferent pupillary fibers leave the optic tract anterior to the geniculate nucleus, patients with geniculate lesions do not have pupillary disorders.

Treatment depends on the nature of the lesion.

LGN infarction is usually managed by a neurologist. Neoplastic lesions are usually handled in conjunction with a neurosurgeon and/or oncologist. Follow-up by an ophthalmologist or neuro-ophthalmologist is helpful in monitoring visual function. 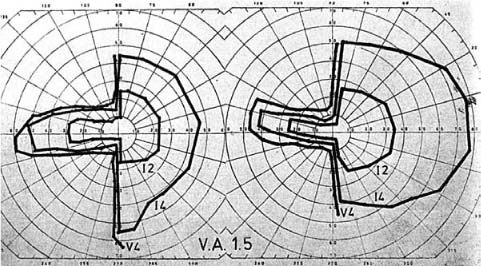 DISORDERS OF THE OPTIC RADIATIONS

As the optic radiations exit the lateral geniculate nucleus, they lie in a small portion of the posterior limb of the internal capsule. They then course inferiorly through the temporal lobe and superiorly through the parietal lobe, on their way to their final synapse in the occipital cortex. The clinical manifestations of optic radiation lesions depend on their location.

There is normal visual acuity with any unilateral retrochiasmal lesion, unless the optic nerves or chiasm is involved, which is rarely the case with more posterior lesions of the visual radiations.

Patients may be aware of a homonymous hemianopia (see later). Patients with partial hemianopia due to temporal lobe disease are often unaware of their visual defect. Many patients with parietal lobe hemianopia are entirely unaware of their field defect. This applies to lesions in both the dominant and nondominant parietal lobes. Many of these patients complain of difficulty with reading, because of the inability to follow words across the page with right homonymous defects, and the inability to return to the next line with left homonymous defects. Patients who do recognize a visual deficit often complain of monocular visual loss in the eye on the side of the hemianopic defect. It is therefore imperative to perform visual fields in patients with unexplained monocular visual complaints to rule out a hemianopic defect.

Stroke affecting the internal capsule radiations rarely produces isolated homonymous hemianopia because of the proximity of the other fiber tracts mentioned previously. Other neurologic signs and symptoms accompanying internal capsule hemianopia include (1) transient conjugate deviation of the eyes to the side of the lesion from involvement of the frontopontine pathways; (2) hemiplegia, which may include transient, or rarely, persistent weakness of the frontalis and/or orbicularis oculi; and (3) contralateral hemi-anesthesia.

Other neurologic signs and symptoms are common in patients with lesions of the temporal lobe radiations. Disturbances of language may result from lesions in the dominant temporal lobe. Memory disturbance is also common as are auditory hallucinations. Patients with tumor or abscess may present with grand mal seizures, or more subtle manifestations of epileptiform activity, for example, partial complex seizures resulting in disturbed mood, emotion, and sometimes behavioral automatisms. Anterior lesions affecting the uncinate gyrus may produce “uncinate fits,” characterized by an aura of taste or smell followed by abnormal movements of the mouth and lips and a trance-like state. Auditory or visual hallucinations may also occur.

Other neurologic and neuro-ophthalmologic features that may accompany lesions of the parietal lobe radiations include:

1. Conjugate deviation of the eyes to the contralateral side during forced lid closure (Cogan’s sign).

2. Abnormal optokinetic response for targets moving toward the side of the lesion.

1. The superior margins are sharply defined along the vertical meridian.

2. The horizontal margins may cross the vertical midline (to include the inferior hemifield), and are often sloping, that is, the defect is larger for smaller or dimmer targets.

5. Macular sparing may occur if the field defect is confined to the superior quadrant. If the defect involves the inferior quadrant, macular splitting is usually found. 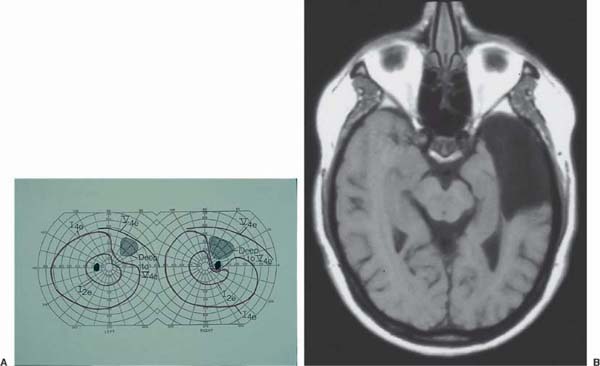 FIGURE 29–5 A: Slightly incongruous right superior quadrantanopia due to presumed perinatal infarction in a 46-year-old man who had been born 3 months prematurely and was unaware of his visual field defect. B: T1-weighted magnetic resonance imaging (MRI) of the same patient. (Courtesy of Dr. Daniel Jacobson, Marshfield Clinic.)

The typical hemianopia in parietal lobe disease is an incomplete, relatively congruous defect that is denser in the inferior field (Fig. 29–6). Because the entire bundle of optic radiations passes through the parietal lobe, however, lesions in this area may cause defects that are superior, inferior, or both. Homonymous hemianopia limited to the superior field is more frequently seen in temporal lobe lesions, but may occur with parietal lobe disease as well, especially with anteriorly placed lesions. Lesions in the superior parietal lobe usually produce an inferior quadrantic defect, whereas larger lesions affect both the superior and inferior hemifields. The congruity of parietal field defects increases with lesions located more posteriorly.

The pupils are normal in disorders affecting the optic radiations.

The optic discs are normal in disorders affecting the optic radiations unless there has been transsynaptic degeneration as a result of damage during gestation or infancy.

Stroke is the most common cause of damage to the radiations within the internal capsule. Other causes of temporal lobe radiation lesions include: