Clinical Anatomy and Physiology of the Auditory and Vestibular Systems.

1 Clinical Anatomy and Physiology of the Auditory and Vestibular Systems

This chapter discusses the clinical anatomy and physiology of the hearing and balance systems. The focus is on the clinically relevant information that impacts the ability to reach a working diagnosis and to institute physiologically based treatments. This chapter is divided into two sections: the auditory system and the vestibular system.

The inner ear houses the organs for hearing and balance. The ear begins to develop about 3 weeks after conception with the appearance of the otocyst (see Chapter 4 for more details). The walls of the otocyst originate from the ectoderm and the mesoderm separated by a basement membrane layer. Soon after, the infoldings of the otocyst walls form the endolymphatic duct and sac, the utricle and semicircular canals, and then the saccule and cochlear duct. The neural crest forms the statoacousticofacial ganglia. The ear is developed by week 8 and a primitive organ of Corti is developed by the fifth month. At birth, the auditory and vestibular systems are anatomically fully developed and ready to adapt to sound and balance stimulation. Images taken by the senior author of a left ear model (Kilgore International Inc., Coldwater, MI) are shown in Fig. 1–1 to demonstrate the three-dimensional (3D) orientation of the inner ear. Comprehensive anatomy and embryology of the inner ear are discussed elsewhere.1 Some of these details are cited in this chapter when they have direct clinical relevance.

The human auditory system has two parts: the peripheral system and the central system. The peripheral system is composed of the outer ear, middle ear, inner ear, and auditory nerve up to the root entry zone in the brainstem. The outer ear includes the pinna and the external auditory canal. The main function of the outer ear is to collect and transport sound to the tympanic membrane. The shape of the pinna and length of the external canal vary considerably, and their effect depends on the direction of sound (incidence angle of sound). The middle ear includes the tympanic membrane, the chorda tympani nerve, the tensor tympani muscles, the ossicles (malleus, incus, and stapes), the stapedial muscle (attached to the stapes head), the eustachian tube opening, and the oval and round windows. The resonance frequency (the frequency range of efficient transmission of sound) of the external ear canal is in the range of 3 to 4 kHz, of the tympanic membrane is in the range of 800 to 1600 Hz, and of the ossicles is in the range of 500 to 2000 Hz. Together they increase and broaden the gain in the 2- to 4-KHz range, which is important for speech perception. The tympanic membrane and the ossicles amplify (25-dB mechanical gain) and conduct sound to the inner ear via the stapes footplate through the oval window. The stapedial muscle contracts at loud sound levels to stiffen the ossicular chain to minimize damage to the inner ear from unexpected sounds above 90 dB. The eustachian tube equalizes the middle ear pressure relative to the atmospheric pressure to maximize tympanic membrane movements. It also protects and clears the middle ear cavity. The detailed anatomy, function, and dysfunction of the eustachian tube are discussed in Chapter 10.

The cochlea is a helical-shaped organ of about 22/3 turns and 1 cm in length around the modiolus and the spiral lamina structures. The cochlea is divided by the basilar membrane (BM) and Reissner’s membrane into three compartments: the superior scala vestibule, scala media (cochlear duct), and inferior scala tympani (Fig. 1–2). The scala vestibuli and tympani are filled with the perilymph fluid, whereas the scala media is filled with the endolymph fluid. The scala tympani and scala vestibuli communicate at the apex of the cochlea at the termination of the scala media (helicotrema). The oval and round windows are the two middle ear openings to the scala vestibuli and the scala tympani (the perilymph fluid spaces), respectively. The oval window moves in synchrony with sounds (from the stapes movements), resulting in a traveling pressure wave in the cochlea along the BM to the round window. The traveling wave enters the base of the cochlea, via the vestibule, and travels the length of the cochlea terminating at the round window. The round window membrane has several cell layers that vibrate in response to the traveling wave, albeit with a time delay often referred to as the oval–round window phase difference. This is important in optimizing the BM response, which will be altered if the round window is sealed or wide open. The round window cellular layers also allow transmission of micrometer-size materials and medication from the middle ear to the inner ear. The scala media has a third membrane, the tectorial membrane, which lies above the hair cells of the BM and forms the organ of Corti (the hearing organ). The organ of Corti (Fig. 1–3) is complex, but its macroscopic anatomy is vital in understanding the physiology of hearing. The clinically important structures include the stria vascularis and spiral ligament structures, the BM, the tectorial membrane, outer hair cells (OHCs), and inner hair cells (IHCs). 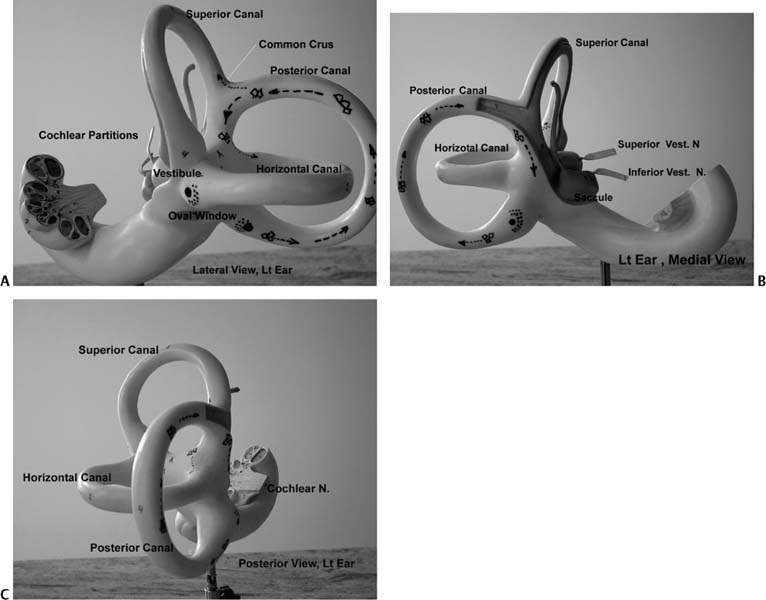 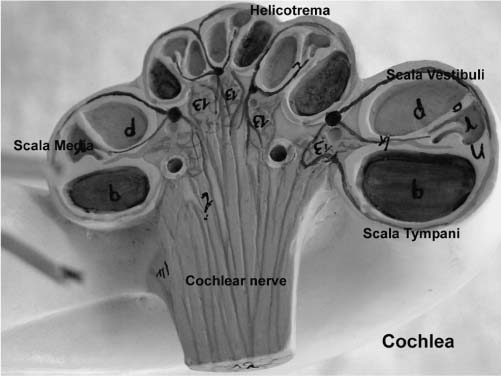 Figure 1–2 Schematic representation of the cochlea showing the geometrical relation between the different scalae from the base to the apex. 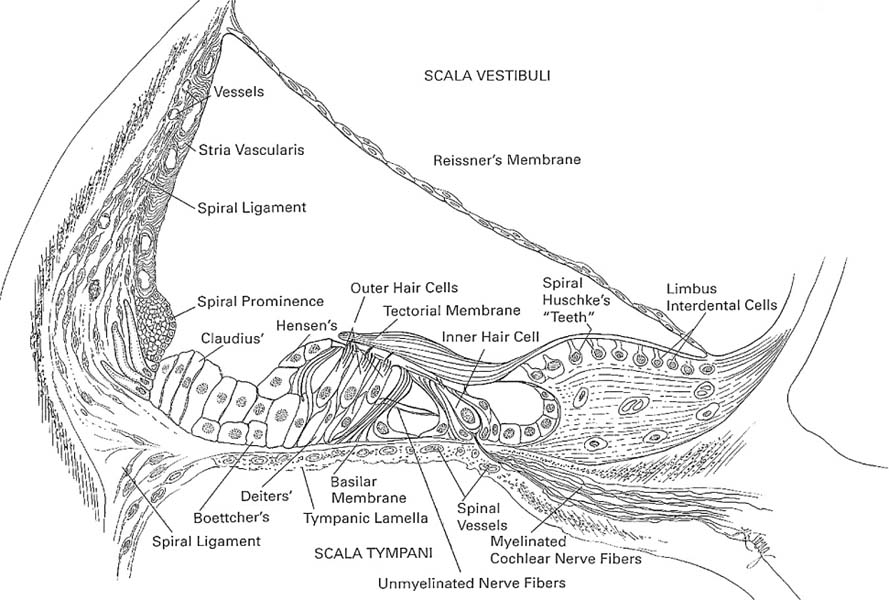 The stria vascularis and spiral ligament play a critical role in maintaining the endolymph homeostasis via active and passive ionic transport channels into the endolymphatic space. The endolymph contains intracellular-like fluid with high potassium and low sodium concentration, whereas the perilymphatic fluid resembles the extracellular fluids, having low potassium and high sodium concentration. The endolymphatic duct (vestibular aqueduct) connects the endolymphatic space to the external sac for appropriate pressure and ionic and hormonal regulation. The endolymphatic sac has higher protein content than the endolymphatic space, consistent with its role in the resorption of endolymph. The cochlear aqueduct, located posterior to the round widow at the base of the cochlea, connects the perilymphatic system to the cerebrospinal fluid (CSF). The ear, like the brain, is immunologically protective, and there are few lymphocytes in the ear. The labyrinth is separated from the circulation by the blood– labyrinthine barrier to maintain the ionic characteristics of the cochlear fluids. It is also known that the inner ear lacks a significant lymphatic drainage. Similar to CSF, perilymph contains immunoglobulins at a concentration of one one-thousandth of that in serum. Immunoglobulin G (IgG) is the predominant antibody, whereas IgM and IgA are present in lesser concentrations.

The OHCs are cylindrical in shape, and each cell supports three rows of stereocilia. The OHC bodies are attached at their base to the Deiters’ cells and the stereocilia are attached to the tectorial membrane at their apices. The stereocilia are displaced predominantly by the movements of the basilar membrane and less so by the tectorial membrane. The stereocilia are filled with actin (contractile protein) and interconnected by cross-links. This arrangement leads to the graded stiffness and contractility along the basilar membrane that underlies the tonotopic features and characteristic frequencies of the BM. The OHCs are directly responsible for generating otoacoustic emissions. They do not contribute directly to auditory afferents but contribute to the frequency specificity, “cochlear amplification,” and they modulate loudness within a 40-dB hearing sensitivity.2,3

The IHCs are flask-shaped cells arranged in a single row with their associated stereocilia. The apical parts of the stereocilia are cross-linked with different contractile proteins and gated transduction channels. The ionic concentrations of K+ and Ca+ are critical for the normal function of the IHC and the production of endocochlear potentials.4–6 The IHCs innervate the cochlear nerve via synapses with type I neurons (95%) representing the afferent system. The OHCs synapse with type II neurons (5%), representing the efferent system from the brain/contralateral ear via the olivocochlear bundle (OCB) along the inferior vestibular nerve. The cochlear nerve is myelinated and is composed of ~35,000 nerve fibers that transmit (afferent) and receive (efferent) sound information to and from the central auditory system.

The function of the cochlea is the mechanical to neurotransduction of sound energy of pure tones and speech. It is well established that the Békésy traveling wave theory is the underlying process with which the BM movements stimulate (i.e., modulate the resting activities) OHCs and IHCs. The OHC motility provides the cochlea amplification. With movements, frequency-dependent polarizations of OHCs generate local negative feedback to enhance the traveling wave peak amplitude and sharpness (i.e., fine-tuning) of each segment (characteristic frequency) of the BM. The basal end of the cochlear converts high-frequency auditory signals and the apical end converts low-frequency auditory signals. The resting neural activities of the BM and the OHC form the cochlear microphonics. The displacement of the BM forms the summating potentials (SPs) needed to reach the threshold for firing the action potential (AP) of auditory nerve fibers terminating at the IHCs. The efferent system, which innervates the OHCs, also impacts the amplification and fine-tuning of the auditory signals before reaching the IHCs. The auditory signal is further amplified at the central system by virtue of the progressive increase of auditory neurons to about 10 million at the cortex.

The central auditory system (Fig. 1–4) is composed of different nuclei from the brainstem to the cortex.7

Tags: Medical Otology and Neurotology
Jun 10, 2016 | Posted by admin in OTOLARYNGOLOGY | Comments Off on Clinical Anatomy and Physiology of the Auditory and Vestibular Systems.
Premium Wordpress Themes by UFO Themes
WordPress theme by UFO themes