A division between laser surgery for glaucoma and the more traditional glaucoma operations is becoming more and more artificial. The latter surgical category was originally distinguished by the term “conventional surgery,” although laser techniques have now become the more conventional forms of surgery for glaucoma, prompting the need to reconsider the terminology. “Invasive surgery” is not a satisfactory alternative, because invading the eye with a laser beam can cause just as much tissue alteration as invading it with a knife. The term “incisional surgery,” as used in this text, is not fully satisfactory either, because some of the newer laser procedures include incisional techniques. The fact is that as laser technology continues to expand, the day may come when all glaucoma surgery will include laser instruments. For these reasons, the chapters that follow combine laser and incisional procedures under general surgical categories, and this chapter, although it pertains primarily to incisional techniques, actually relates to both disciplines of glaucoma surgery.

The incision of any tissue is followed by a complex process that attempts to heal the wound. The desire in most operations is to achieve complete, strong wound healing. For the glaucoma surgeon who is performing a filtering procedure, however, excessive wound healing can be a detriment, leading to failure of the operation. This chapter considers general aspects of wound healing. (Specifics related to filtering surgery and measures to prevent excessive scarring are discussed in Chapter 38.)

Wound healing is typically considered to occur in three phases: inflammation, proliferation, and remodeling. However, it may help to think of this complex, and only partially understood, process in four overlapping phases: (a) clot phase, (b) proliferative phase, (c) granulation phase, and (d) collagen phase.

Almost immediately after a tissue incision, blood vessels constrict and leak blood cells, platelets, and plasma proteins, which include fibrinogen, fibronectin, and plasminogen. In addition, blood-vessel rupture stimulates platelet aggregation and activation of various tissue growth factors, which are chemotactic to inflammatory cells, stimulating the intrinsic coagulation cascade (1–4). As a result, these blood elements clot to form a gel-like fibrin–fibronectin matrix (1,5).

Inflammatory cells, including monocytes and macrophages, along with fibroblasts and new capillaries, migrate into the clot within a few days after the surgery. In a rabbit model of filtering surgery, fibroblasts were seen to migrate from episcleral tissue, epimysium of the superior rectus, and subconjunctival connective tissue (6), and in a monkey model, they were proliferating along the walls of the limbal fistula by day 6 (7). By using the incorporation of tritiated thymidine as a marker of cell division to study the time course of cellular proliferation after filtering surgery in monkeys, incorporation was detected as early as 24 hours postoperatively, peaked in 5 days, and returned to baseline by day 11 (8). Angiogenesis, or proliferation of new blood vessels, also takes place during this phase (9).

As the fibrin–fibronectin clot is degraded by inflammatory cells, the fibroblasts begin to synthesize fibronectin, interstitial collagens, and glycosaminoglycans to form young fibrovascular connective tissue, or granulation tissue (5). In the rabbit model, granulation tissue was seen in the fistula by the third day (6), whereas in the monkey model, it was lining the fistula by at least day 10 (7).

Procollagen is synthesized intracellularly by fibroblasts (10), and it is then secreted into the extracellular spaces, where it undergoes biochemical transformation into tropocollagen. Approximately 2 weeks after surgery, the tropocollagen molecules aggregate into immature soluble collagen fibrils, and over the next few months undergo cross-linking to form mature collagen. The amount of collagen in the wound is the result of collagen synthesis and degradation. The degradation process is controlled by the family of proteolytic enzymes, called matrix metalloproteinases (11–15). Although the matrix metalloproteinases have been found in healthy subconjunctival tissues and aqueous humor (16–18), their elevated levels have been associated with more aggressive scarring in the eye (19). Eventually, blood vessels are partially reabsorbed, and fibroblasts largely disappear, probably by apoptosis (20), leaving a collagenous scar with scattered fibroblasts and blood vessels (5).

Commonly used injectable anesthetics include lidocaine, bupivacaine, and mepivacaine. When compared on the basis of induced lid akinesia, these three agents were found to be similar with regard to onset (less than 6 minutes) and depth of anesthesia, whereas bupivacaine had the longest duration of effect (up to 6 hours, compared with 90 minutes for mepivacaine and 15 to 30 minutes for lidocaine) (21). In an evaluation of combined agents, bupivacaine, 0.5%, lidocaine, 2%, and 1:100,000 epinephrine were more effective in producing lid and globe akinesia than bupivacaine alone or the two anesthetics without epinephrine (22). Bupivacaine alone was slower in producing anesthesia but was more effective in producing akinesia than the two anesthetics combined without epinephrine. The three combinations were similar with regard to frequency of pain during a 30-minute operation and the need for analgesia 6 hours postoperatively.

Epinephrine may enhance the effect of local anesthetics, presumably by minimizing systemic spread from the injection site by its vasoconstrictive action. However, it may also impose an additional risk in glaucomatous eyes by reducing vascular perfusion to an already compromised optic nerve head. Another supplement to local anesthesia that does appear to be safe and effective is hyaluronidase, which serves to improve local tissue spread within the injection site by breaking down the connective tissue ground substances. In recent years, however, hyaluronidase has become difficult to obtain commercially.

Other Types of Local Anesthesia

Some surgeons prefer to avoid the risks associated with retrobulbar anesthesia by using peribulbar (transconjunctival injection near the equator of the globe without entering the muscle cone), sub-Tenon (more anterior placement near the surgical site), subconjunctival, or topical anesthesia (25–29). The last three methods may be the safest of these approaches in patients with glaucoma, because both retrobulbar and peribulbar injections can cause significant IOP elevations (30,31). In a study of 104 eyes with and without glaucoma receiving retrobulbar or peribulbar anesthesia for intraocular surgery, the 40 eyes with glaucoma had higher and more persistent increases in IOP (30). One minute after injection, the IOP was 10 mm Hg or more above baseline in 35% of the glaucomatous eyes, and 20 mm Hg or more in 10%. The mean IOP elevation after 5 minutes was greater with retrobulbar anesthesia, although ocular compression significantly reduced the IOP at 5 minutes.

A reported technique for sub-Tenon anesthesia involves the injection of lidocaine, 2%, over the superior, medial, and lateral rectus muscles in conjunction with a lid block and standard sedative (32). In a randomized trial comparing this approach with retrobulbar anesthesia, the sub-Tenon anesthesia required a smaller volume of local anesthetic, less additional anesthesia, and less postoperative analgesia (32).

Subconjunctival anesthesia by using a 1- to 2-mL injection of 1:1 mixture of mepivacaine, 2%, and bupivacaine, 0.75%, in the superotemporal quadrant was found to be an effective alternative to peribulbar anesthesia for trabeculectomy (33).

Although general anesthesia is not commonly used in glaucoma surgery, it is advisable to routinely use the assistance of an anesthesiologist or anesthetist to monitor the patient’s vital signs and to provide adjunctive medications. The latter may include short-acting analgesics, such as propofol and fentanyl citrate, and short-acting central nervous system depressants, such as midazolam HCl, for sedation. The addition of alfentanil to midazolam has also been shown to be advantageous (35). Remifentanil is another, relatively new, ultrashort-acting opioid that can be rapidly titrated and individualized for various levels of surgical interventions. Although it is expensive, and respiratory depression and postoperative nausea are considerations, studies have shown that respiratory depression with remifentanil is mild, and remifentanil sedation for retrobulbar blocks appeared to be superior to sedation with propofol (36). A combination of remifentanil and propofol has provided excellent relief of pain and anxiety with the fewest adverse effects (37,38).

In addition, ultrashort-acting barbiturate anesthetics such as methohexital sodium (Brevital) can be administered intravenously to provide a few minutes of sleep while the retrobulbar injection is being given.

Good exposure of the surgical field is critical to a successful glaucoma operation. This begins with the selection of an appropriate eyelid speculum. Instruments are available in a wide range of designs, each with certain advantages and disadvantages. A desirable speculum, however, is one that not only separates the eyelids but also lifts them from the globe and allows the surgeon to adjust the degree of lid separation. Lateral canthotomy may also be performed to improve exposure in selected eyes.

Because most glaucoma surgery is performed in the superior quadrants, the next step toward good exposure is to rotate the eye down, which is usually accomplished with a traction (or bridle) suture. A traditional technique is the superior rectus traction suture, in which a 4-0 silk suture is passed transconjunctivally beneath the muscles and then attached to the head of the surgical drape with a clamp (Fig. 37.1). Potential complications with this approach include subconjunctival hemorrhage, conjunctival defects, scleral perforation, patient discomfort, and postoperative ptosis. A corneal traction suture, in which a 7-0 silk or polyglactin (e.g., Vicryl) suture on a cutting needle (i.e., S-29 for silk sutures) is passed through approximately three-fourths thickness, superior, peripheral cornea and attached to the drape over the cheek (Fig. 37.2), provides good exposure while eliminating the foregoing complications (39,40). However, it can distort the cornea and anterior chamber when the eye is soft. 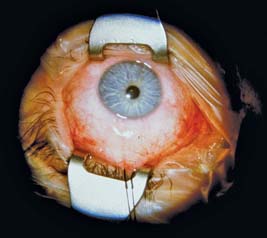 Figure 37.1 Eye rotated down by superior rectus traction suture and attached to head of surgical drape.