Gonioscopy and Other Techniques for Assessing the Anterior Segment

Assessment of the anatomy of the anterior chamber angle by gonioscopy is an essential part of the glaucoma evaluation. The drainage angle, as well as other structures in the anterior segment (namely, iris insertion and ciliary body anatomy), can also be assessed by using ultrasonographic and laser imaging techniques, and cycloscopy. In this chapter, we describe these techniques, and those involved in the assessment of aqueous humor dynamics. Although the methods in the latter category—specifically, tonography, fluorophotometry, and measurement of episcleral venous pressure—are not routinely used in clinical practice today, clinicians should be familiar with them because their results form our understanding of aqueous humor dynamics and the mechanism of action of glaucoma medications used to lower intraocular pressure (IOP).

This discussion of gonioscopy is limited to technique and normal anatomic findings, whereas abnormal findings on gonioscopic examination associated with the various forms of glaucoma are considered in Section II.

In 1907, Trantas visualized the angle in an eye with keratoglobus by indenting the limbus. He later coined the term gonioscopy. Salsmann introduced the goniolens in 1914, and Koeppe improved on it 5 years later by designing a steeper lens. Troncoso also contributed to gonioscopy by developing the gonioscope for magnification and illumination of the angle. In 1938, Goldmann introduced the gonioprism, and Barkan established the use of gonioscopy in the management of glaucoma. (More details on the history of gonioscopy are available in a review by Dellaporta (1).) 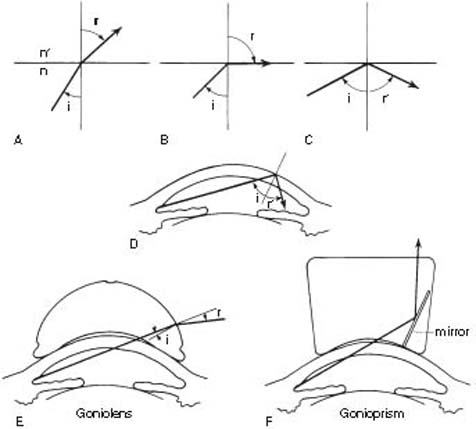 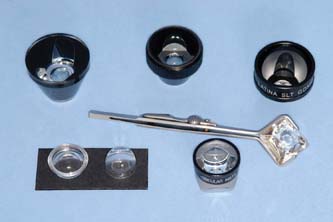 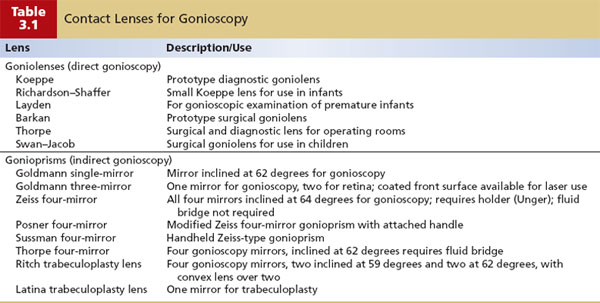 The Koeppe lens is the prototype diagnostic goniolens and is available in different diameters and radii of posterior curvature. A gonioscope, or handheld biomicroscope, provides 15× to 20× magnification. The light source is usually a separate handheld unit, such as the Barkan focal illuminator, although it may be attached to the gonioscope.

Direct gonioscopy is performed with the patient in a supine position, preferably on a movable diagnostic table or chair. After applying a topical anesthetic, the goniolens is positioned on the cornea, with either balanced salt solution, a viscous preparation such as methylcellulose, or the patient’s own tears between the goniolens and the patient’s cornea. The examiner usually holds the gonioscope in one hand and a light source in the other (Fig. 3.3). Occasionally, an assistant may be needed to move the goniolens to the desired position. Alternatively, a gonioscope with mounted light source may be used, which allows the examiner to control the goniolens with the other hand. In either case, the examiner scans the anterior chamber angle by shifting his or her position until all 360 degrees have been studied. An excellent overview of direct gonioscopy, with guided video gonioscopy examinations, is available at www.gonioscopy.org/. 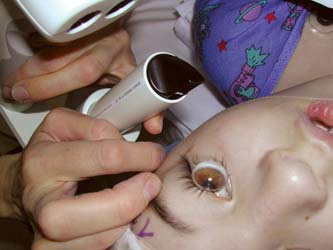 Figure 3.3 Technique of direct gonioscopy, by using a Koeppe goniolens and portable slitlamp, during an examination under anesthesia of a child’s eye.

The gonioprism and a slitlamp are the only instruments needed for indirect gonioscopy. Several types of goniolenses are available with a single mirror or multiple mirrors. The Goldmann single-mirror lens is tilted 62 degrees from the plano front surface, which allows examination of the anterior chamber angle. The Goldmann three-mirror lens contains two mirrors for examination of the fundus, and one for examination of the angle. Because of their 7.38-mm posterior radius of curvature, both Goldmann lenses require the use of a viscous material to fill the space between the cornea and the lens. In contrast, a modified Goldmann-type lens, with its 8.4-mm radius of curvature, requires no viscous bridge (2). Goldmann-type lenses have also been modified with antireflection coating, allowing them to be used for laser trabeculoplasty.

In the Zeiss four-mirror lens, all the mirrors are tilted at 64 degrees for evaluation of the angle, eliminating the need to rotate the lens. The original four-mirror lens is mounted on a holding fork (an Unger holder), whereas newer models have a permanently attached holding rod (a Posner lens) or are held directly, such as the Sussman-style lenses (3). The posterior curvature of these four-mirror lenses is similar to that of the cornea, conveniently allowing the patient’s own tears to be used as the fluid bridge. With the Goldmann- and Zeiss-type instruments, the anterior chamber angle is viewed “indirectly” through a mirror 180 degrees from the quadrant being viewed (Fig. 3.4). Some newer gonioprisms enable direct viewing of the angle (4,5). 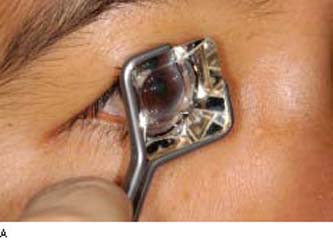 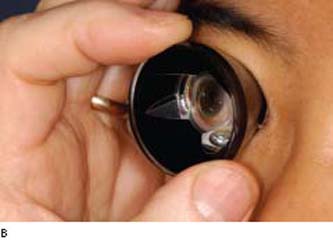 Figure 3.4 Technique of indirect gonioscopy with a Zeiss four-mirror lens (A) and a Goldmann three-mirror lens (B).

Several types of lenses, including the Ritch trabeculoplasty lens and the Latina lens, are used in laser therapy (discussed in Section III).

The cornea is anesthetized and, with the patient positioned at the slitlamp, the gonioprism is placed against the cornea with or without a fluid bridge, depending on the posterior radius of curvature of the instrument. The lens is then rotated to allow visualization of all 360 degrees of the angle, or the quadrants are studied with the four mirrors. Visualization into a narrow angle can be enhanced by manipulating the gonioprism—for example, asking the patient to look in the direction of the mirror being used. A web-based gonioscopy module with video, available at www.gonioscopy.org, is recommended for learning this technique (4).

Comparison of Direct and Indirect Gonioscopy

There is no unanimity of opinion on which basic method of gonioscopy is best. With direct gonioscopy, the height of the observer may be changed to look deeper into a narrow angle, whereas the gonioprism is limited in this regard by the height of the mirror. In addition, the goniolens may cause less distortion of the anterior chamber. Both features make it desirable when assessing the true depth of the anterior chamber angle (5). A major advantage of direct gonioscopy, especially with the infant Koeppe lenses, is its use in sedated or anesthetized patients, as in the examination of children. These lenses are also useful in examining the fundus through a small pupil with a direct ophthalmoscope.

In indirect gonioscopy, the slitlamp may provide better optics and lighting, which could be an advantage when looking for subtle details in the angle. Furthermore, the method requires fewer additional instruments and occupies less space than direct gonioscopy does. Indirect gonioscopy is also performed faster than direct gonioscopy is; this is particularly true with the Zeiss four-mirror lenses and modified Goldmann-type lenses, because no viscous bridge is required. Gonioprisms with a posterior radius of curvature closer to that of the anterior corneal surface may also reduce corneal distortion. Gonioprisms with taller mirrors facilitate visualization of narrow angles. Finally, because of its relatively small diameter of corneal contact, the Zeiss four-mirror lens can also be used in “compressive gonioscopy” (6) (explained in Chapter 12).

Any instrument that contacts the eye creates the potential hazard of transmitting bacterial and viral infection. This issue is considered in more detail in Chapter 2. (Although Chapter 2 discusses instrument cleaning in the context of tonometry use, the same basic principles apply with diagnostic contact lenses (7).)

Starting at the root of the iris and progressing anteriorly toward the cornea, the following structures can be identified by gonioscopy in an adult with a normal angle (Figs. 3.5 and 3.6). 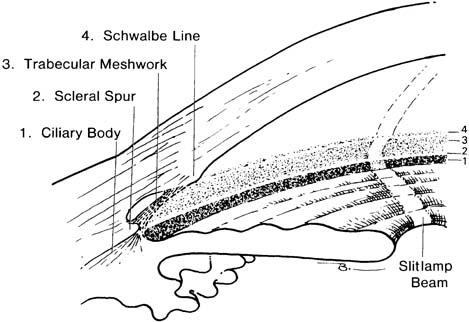 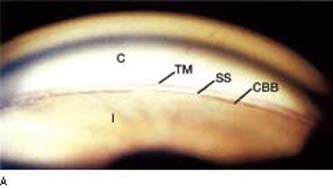 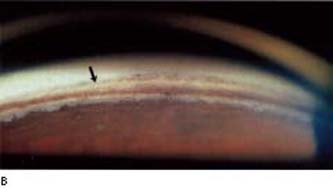 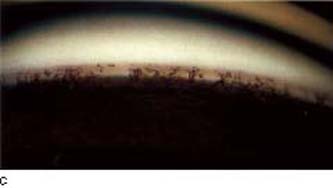 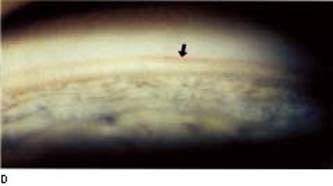 This is the posterior lip of the scleral sulcus, which is attached to the ciliary body posteriorly and the corneoscleral meshwork anteriorly. It is usually seen as a prominent white line between the ciliary body band and functional trabecular meshwork, unless it is obscured by dense uveal meshwork or excessive pigment dispersion. Variable numbers of fine, pigmented strands may frequently be seen crossing the scleral spur from the iris root to the functional meshwork. These are referred to as iris processes, and represent thickenings of the posterior uveal meshwork.

This is seen as a pigmented band just anterior to the scleral spur. Although the trabecular meshwork actually extends from the iris root to Schwalbe line, it may be considered in two portions: (a) the anterior part, between the Schwalbe line and the anterior edge of the Schlemm canal, which is involved to a lesser degree in aqueous outflow, and (b) the posterior (or functional) part, which is the remainder of the meshwork and is the primary site of aqueous outflow (especially that portion immediately adjacent to the Schlemm canal) (8).

The appearance of the functional meshwork varies considerably depending on the amount and distribution of pigment deposition. The trabecular meshwork has no pigment at birth, but with age, color develops, from faint tan to dark brown, depending on the degree of pigment dispersion in the anterior chamber. The distribution of pigment may be homogeneous for 360 degrees in some eyes and irregular in others. In the functional portion of the meshwork, especially when lightly pigmented, blood reflux in the Schlemm canal may sometimes be seen as a red band.

The Schwalbe line is the junction between the anterior chamber angle structures and the cornea. It is a fine ridge just anterior to the meshwork and is often identified by a small buildup of pigment, especially inferiorly. By using a thin slit beam at a slightly oblique angle, this line can be identified by the corneal wedge created by light wedge created at the junction between the inner light beam along the cornea endothelium and the outer light beam along the corneoscleral junction.

Blood vessels are normally not seen in the angle, although loops from the major arterial circle may appear in front of the ciliary body band and less commonly over the scleral spur and trabecular meshwork. These vessels typically take a circumferential route in the angle.

In addition, an anterior ciliary artery may occasionally be seen as a more radially oriented vessel in the ciliary body band of lightly pigmented eyes. Circumferential and radial vessels may also occasionally be seen in the peripheral iris of lightly colored eyes. In a study of 100 patients with abnormal anterior chamber angle vascularization of unknown cause, 16 patients had normal angle vessels in both eyes and 10 patients had normal angle vessels in one eye (9). Radial vessels were more common in the peripheral iris, whereas the circumferential type was more common on the ciliary body band.

Various classification systems have been suggested for describing the width and appearance of the anterior chamber angle. However, descriptive words and drawings are probably the most useful technique for recording gonioscopic findings. The recorded data should include (a) configuration of the angle, (b) depth of the angle on the basis of the most posterior structure that can be seen, (c) degree of pigmentation, and (d) presence of abnormal structures. For example, a normal angle might be recorded as “wide open, with visualization to a wide ciliary body band for 360 degrees and moderate trabecular meshwork pigmentation.” Drawings can also be placed on a chart with concentric circles to document more specific details.

This technique allows direct visualization of ciliary processes under special circumstances, such as the presence of an iridectomy, wide iris retraction, aniridia, and some patients with aphakia. The main value of the technique is in conjunction with laser therapy to the ciliary processes (transpupillary cyclophotocoagulation, discussed in Section III).

Another useful clinical tool to examine the anterior ocular segment is ultrasound technology. Ultrasound echoes are produced from interfaces of fluids and tissues. The differences between fluid or tissue properties yield certain echo characteristics between the interfaces of various compartments or tissue densities. The echo is optimal when the acoustic wave is oriented perpendicular to the interface. Ultrasonographic techniques can provide information in the amplitude mode, or A-scan, or in the brightness mode, or B-scan.

In general, low-frequency ultrasonography allows deeper tissue penetration but lower resolution, compared with high-frequency ultrasonography, which provides higher resolution but shallower penetration. There is a wide range of frequencies currently in use in ophthalmology, from 10 MHz, to image the globe and orbit, through 20 MHz, which images from the cornea to the posterior lens, 35 to 50 MHz, which image from the cornea to the anterior lens, and 100 MHz, for imaging the cornea only (Fig. 3.7). Frequencies of 20 to 50 MHz, which are used to image the anterior segment, are referred to as high- resolution ultrasound biomicroscopy (10). 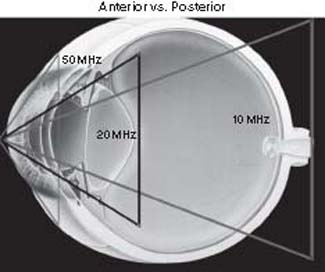